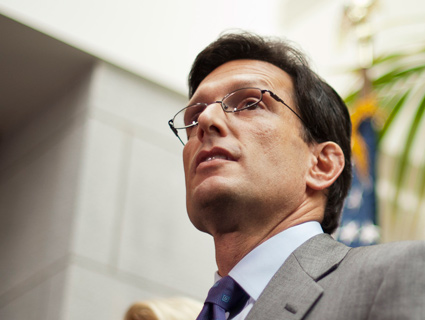 On Friday at the University of Pennsylvania, House Majority Leader Eric Cantor (R-Va.) will deliver what is, essentially, the Republican response to Occupy Wall Street (the same Eric Cantor who referred to the protestors as “mobs”). A Cantor aide told Politico that the congressman will “talk about the various socioeconomic classes and how Washington should stop pushing different people down the economic ladder and instead can work together to ensure that all people have the ability move up.”

What qualifies Cantor to speak about inequality? Not much. Here are a few of the greatest hits from the last few years of the GOP’s war on the poor:

Unemployment insurance (UI)—which, as numerous studies like a recent one from Moody’s Analytics have pointed out, is one of the most effective forms of stimulus—is scheduled to expire at the end of this year. But Republicans want to reform the system before giving it new life. According to Politico, Cantor’s speech could shed some light on the GOP’s plans. To get a sense of what he might say, check out this speech he delivered at the conservative Heritage Foundation in late 2009 on undoing the Obama administration’s economic recovery plan. The centerpiece: Requiring UI recipients who are most likely to exhaust their benefits to participate in education, training, or “enhanced job search” as a condition of eligibility.

As an example, he cited a program enacted in Georgia in 2003 that uses unemployment insurance to pay companies to train and, ideally, eventually hire job-seekers. But the program overpromised and undelivered, ballooning both in size and cost, according to a recent interview with Georgia Labor commissioner Mark Butler:

The spending had gotten out of control. And, basically, a program that had been budgeted for one year for $6 million spent it in less than six months and wasn’t sustainable. The results had started to slide. We weren’t seeing as much positive results. Record-keeping was spotty, at best.

To boot: Since 2003, only 18 percent of the program’s participants have been hired by the companies that trained them. Granted, lawmakers from both sides of the aisle—including President Obama—have touted the program. But keep this example in mind.

In 2010, the then-Minority Leader Cantor introduced his “YouCut” poll, an open source initiative Republicans used to target government programs they hate, and persuade lawmakers to defund. First on the chopping block: $2.5 billion in funding for the Temporary Assistance for Needy Familiies (TANF) Emergency Contingency Fund. Congress built the $5 billion Emergency Fund into the Recovery Act for states to draw on during times of economic distress. It was intended to relieve diminishing unemployment insurance funds, and subsidize public and private sector job growth.

But the states had burned through half of that money by May of last year—just in time for Cantor’s office to brand it as a program “created to incentivize states to increase their welfare caseloads” and as a “backdoor way to undo” welfare reform.

The numbers tell a different story. According to the Center on Budget and Policy Priorities, the fund helped place 250,000 people in jobs in 2009 and 2010. But Senate Republicans killed an effort to renew the highly effective program for 2011.

Cantor is also a member of the 47 percent club: Conservatives railing against that stealthy 47 percent of Americans who supposedly don’t pay taxes. As the Economic Policy Institute’s Andrew Fieldhouse explained recently, this is nonsense:

The 47 percent…are a mix of current taxpayers that just happen to have not made enough income in the current year to have income tax liability, and former income taxpayers (retired households)…

Unlike other taxes, the federal income tax intentionally exempts subsistence levels of income from taxation, largely through the standard deduction and personal exemption. The tax code also provides an extra standard deduction for retirees, who face high costs of living, and exempts some Social Security income from taxation. Because of this, and because the effect of the earned income tax…is to offset payroll tax liability for low-earners, it is true that 18 percent of households (mostly retirees and very low-earning families with children) will face no net federal taxes on income this year.

Arguably, the centerpiece of the GOP’s war on the poor was the House’s budget for 2012, authored by Rep. Paul Ryan (R-Wisc.). CBPP estimated that two-thirds of the spending cuts in the bill, which Cantor helped engineer, come directly from low-income programs—including food stamps and Medicaid, which would see its spending slashed by fifty percent over the next decade.

Will Cantor introduce a bold new vision for the GOP’s plan for closing the wealth gap? That’s unclear, but unlikely.

UPDATE 1: Eric Cantor won’t be talking about the wealth gap today. Or, apparently, about anything else, the Philadelphia Daily News reports. Why?:

[B]ecause [it] was going to be open to the first 300 people who showed up. Given that hundreds of Occupy Philadelphia protesters were planning to march from City Hall to the campus to protest the speech, that could have been lively audience.

“The Office of the Majority Leader was informed last night by Capitol Police that the University of Pennsylvania was unable to ensure that the attendance policy previously agreed to could be met,” Cantor spokeswoman Laena Fallon said in an email. “Wharton is a educational leader in innovation and entrepreneurship, and the Majority Leader appreciated the invitation to speak with the students, faculty, alumni, and other members of the UPenn community.”

Cantor had expected that his speech, on income disparity in the country, would be open to the media, Wharton students and faculty and guests of the university.

CNN has confirmed the report.

UPDATE 2: Now, Wharton officials are pushing back against Cantor’s explanation that he cancelled his speech over a miscommunicated “attendance policy.” ThinkProgress has the key paragraphs from their just-released response to Cantor:

Wharton deeply regrets that the event scheduled at the School this afternoon with Majority Leader Eric Cantor has been cancelled. The University community was looking forward to hearing Majority Leader Cantor’s comments on important public issues, and we hope there will be another opportunity for him to speak on campus.

The Wharton speaker series is typically open to the general public, and that is how the event with Majority Leader Cantor was billed. We very much regret if there was any misunderstanding with the Majority Leader’s office on the staging of his presentation.

In other words: Nice try.