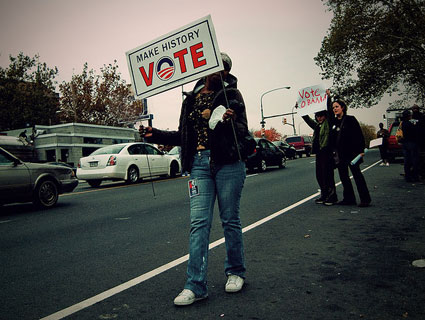 More than five million Americans could find it harder to vote in 2012 than they did in 2008, according to a new report released on Monday by the Brennan Center for Justice. The change is largely due to empowered Republican majorities in states around the country—and Lawrence Norden, the director of the Democracy Program at the Brennan Center, argues the 5 million number could be an underestimate.

“This number that we came up with, five million, is pretty conservative,” Norden says. “The whole issue of access to the polls has become politicized in a way we haven’t seen in the past.”

Since the 2010 mid-terms, states have introduced and passed laws requiring proof of citizenship, ending election day voter registration, restricting voter registration efforts, limiting early voting, and making it harder for the formerly incarcerated to regain their voting rights post-release. The most common of the new restrictions, however, are photo ID laws that require voters to show particular forms of government ID in order to cast a ballot. According to the Brennan Center report, nearly 11 percent of Americans, or 21 million people, lack a government issued photo ID.

Many of the voter ID laws have been based on model legislation written by the conservative American Legislative Exchange Council, or ALEC. Out of the thirty-four states have seen such laws introduced in 2011, seven states—Alabama, Kansas, Rhode Island, South Carolina, Tennessee, Texas, and Wisconsin—have passed them and had them signed into law. (Alabama, Texas, and South Carolina’s laws are subject to the approval of the Justice Department under the Voting Rights Act.)

In some states, the ID requirements have been drawn in a nakedly partisan manner—in Texas, for example, a concealed carry permit for a firearm counts, but not a college ID. The reason the five million estimate is conservative, Norden says, is that it doesn’t factor in all the other laws currently under consideration that could pass and be put in place before the election.

The rash of new voting restrictions is ostensibly intended to combat “voter fraud.” But there’s only one kind of election fraud that has been shown to be a real problem throughout American history, and voter ID laws don’t prevent it. “Any kind of successful fraud we’ve seen in the past is not someone pretending to be someone else, but election officials and party bosses manufacturing votes,” Norden explains.

Large-scale voter fraud has been on the wane as old-school political machines have crumbled and new laws have standardized voting practices. All that voter ID laws from is impersonation: “When we’re talking about voter ID, there’s only one type of fraud it can prevent, which is pretending to be someone else who is already on the books,” Norden says. That kind of small-scale voter fraud, as the Brennan Center has documented before, happens less often than people being struck by lightning.

The new voter ID laws may serve a purpose beyond preventing fraud, however—the same purpose as curtailing early voting, restricting reinfranchisement post-incarceration, and ending election-day voter registration. None of those reforms actually reduce the kind of fraud Republicans claim to be concerned with, which as stated earlier, is extremely rare. They all, however, make it slightly more difficult for Democratic-leaning constituencies to cast ballots.

“If you’re poor…and you don’t have a birth certificate or a credit card, then it becomes extremely difficult to get those things so you can get out and vote,” Norden notes. “Some of those people are going to get ID [and be able to vote], but some of them aren’t.”