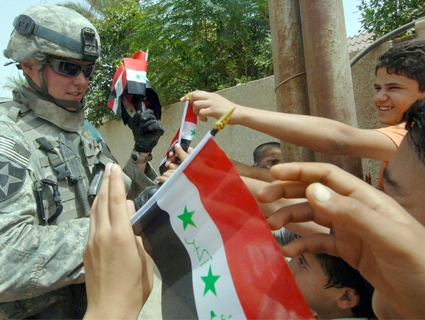 The shock and awe didn’t last long. On Friday afternoon, just minutes after Barack Obama announced that America’s war in Iraq would be finally, truly over at year’s end, critics of the president punctured what could have been a national moment of solemn reflection and relief.

“As a candidate for president, I pledged to bring the war in Iraq to a responsible end,” Obama—the president whose administration has ended the lives of Osama bin Laden, Anwar Awlaki, and just yesterday, Moammar Qaddafi—said in his announcement Friday. “The rest of our troops in Iraq will come home by the end of the year.” Obama added that US-Iraq relations would change dramatically on January 1, 2012, to “a normal relationship between sovereign nations”—a recognition of the past nine years’ weirdness that, although perfectly obvious, still seemed poignant when spoken aloud.

Nonetheless, the end of US military operations in Iraq—100,000 troops have already left the country, and the final 39,000 will be gone by late December—is already being spun by some Republican critics as an admission of defeat, part of a larger attempt to paint Obama and his party as soft on national security. That narrative is increasingly divorced from reality.

Rep. Michele Bachmann (R-Minn.), a presidential hopeful, said in a campaign press release that Obama had shown “weakness” in making “a political decision and not a military one.” The withdrawal, Bachmann argued, “represents the complete failure of President Obama to secure an agreement with Iraq for our troops to remain there to preserve the peace and demonstrates how far our foreign policy leadership has fallen,” she said. “We have been ejected from a country by the people that we liberated and that the United States paid for with precious blood and treasure.”

Mitt Romney’s campaign sent out an email statement with a near-identical sentiment. “President Obama’s astonishing failure to secure an orderly transition in Iraq has unnecessarily put at risk the victories that were won through the blood and sacrifice of thousands of American men and women,” the candidate stated. “The unavoidable question is whether this decision is the result of a naked political calculation or simply sheer ineptitude in negotiations with the Iraqi government.”

Whence comes the idea that poor Obama got manhandled by a Middle Eastern baby state and made a strategic blunder? Our own Kevin Drum and Spencer Ackerman at Wired‘s Danger Room report that the US, concerned about Iranian influence in the region, had sought permission from Iraq to keep a few thousand troops as a deterrent and a reaction force. But when Iraq wouldn’t extend immunity from prosecution to any remaining American troops, Obama said fine, peace out. (He did leave the US embassy in Baghdad with a pretty massive force of security contractors, just in case.)

Is that weakness? Given that any remaining US forces wouldn’t have had a real strategic mission in Iraq after December—patrols are verboten, so they’d basically just have been sitting around, waiting to react to an attack, or waiting to be attacked—it seems that withdrawing them was the real military decision, and the political decision would have been keeping them there for the sake of some abstract “insurance” policy against Tehran—Bachmann’s apparent preferred policy.

One more thing: The status of forces agreement between the US and Iraq that requires American troops to leave this year—the deal that Bachmann and Romney are railing against—was negotiated in 2008 by George W. Bush.