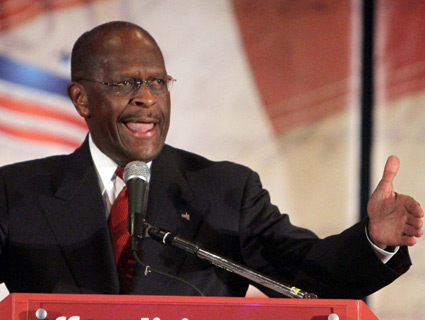 As Texas Gov. Rick Perry deals with the fallout from the revelation that his family leases a hunting camp called “Niggerhead,” Herman Cain is facing his own backlash—for suggesting that the Perrys’ conduct was “insensitive.”

According to the Washington Post, Perry’s family leases a piece of land referred to by local residents as “Niggerhead”; the word is carved into a rock at the entrance of the property. The rock was painted over sometime after the Perry family began renting the property in the 1980s, although the offending word is still “faintly visible.” Locals interviewed by the Post provided comic rationalizations for why the name isn’t offensive. Haskell County Judge David Davis told the paper, “It’s just a name…Like those are vertical blinds. It’s just what it was called.” Perry, for his part, told the Post that the term was an “offensive name that has no place in the modern world.”

Herman Cain, appearing on ABC’s This Week, offered Perry the most mild of rebukes considering he’s old enough to recall what life was like when segregation was the law of the land. “I think that it shows a lack of sensitivity for a long time of not taking that word off of that rock and renaming the place,” he said.

You might have anticipated that Perry would face a firestorm for being associated with the property, but it’s Cain whose remarks are drawing the most criticism from the right. At RedState, Erick Erickson concluded, “It also seems to be a slander Herman Cain is picking up and running with as a way to get into second place.” Glenn Reynolds remarked that until now, Cain’s “big appeal is that he’s not just another black race-card-playing politician.” Over at the Daily Caller, Matt Lewis called Cain’s remarks “a cheap shot, and, perhaps a signal that Cain is willing to play the race card against a fellow Republican when it benefits him.”

The key phrase here is “fellow Republican.” Because, you see, no one thought Cain was “playing the race card” when he said in the same program that black people are “brainwashed” into voting for Democrats and suggested that black people who vote Republican are “thinking for themselves.” Cain wasn’t rebuked by conservatives when he previously suggested President Barack Obama was not “a strong black man,” implied liberals were out to commit genocide against blacks through support for abortion rights, and said he wouldn’t appoint a Muslim to his cabinet.

None of that, in the eyes of the conservatives who cheered him for those remarks, constituted “playing the race card.” But when a man who is old enough to recall living under American apartheid gets a little emotional over a piece of land called “Niggerhead,” that’s where the right draws the line. Not just because Cain is attacking a fellow Republican, but because he stepped out of the proper role of a black conservative, which is to reassure Republicans that their political problems with race are the inventions of a liberal conspiracy. Cain just ran head first into the brick wall of conservative anti-anti-racism, the attitude on the right that accusations of racism directed at white people are of far greater consequence than any lingering vestiges of institutional racism nonwhites might face.

There’s also more than a little irony in Perry facing a racial controversy, especially considering the fact that it’s his relatively moderate record on immigration that has given him the most trouble in the GOP presidential primary. Given Cain’s remarks about Obama and black voters, Michele Bachmann’s support for a return to the pre-1965 immigration system (which involved racial quotas), and former Massachusetts Gov. Mitt Romney’s ad that mostly consists of former Mexican President Vicente Fox praising Perry in heavily accented English, Perry’s campaign has been largely devoid of race-baiting when compared with his opponents.

Yet conservatives might rally around Perry’s embattled campaign because a man with the living memory of what life was like for black people in the segregated South had the chutzpah to suggest that there was something “insensitive” about a place called “Niggerhead.” Meanwhile, Cain, whose stock was rising prior to the controversy, may have harmed his own presidential ambitions with the mere suggestion that a white Republican had been “insensitive” on an issue of race. How’s that for postracial?