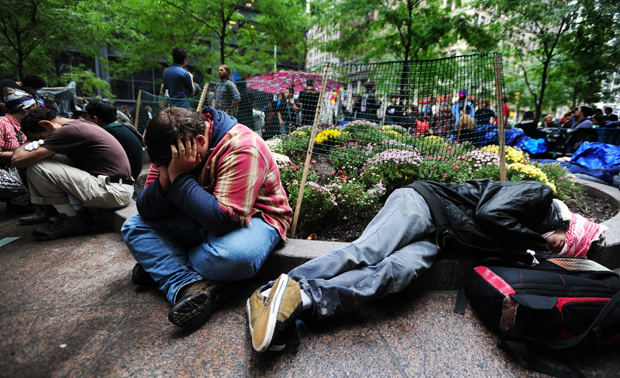 As anyone knows who has ever had to set up a military encampment or build a village from the ground up, occupations pose staggering logistical problems. Large numbers of people must be fed and kept reasonably warm and dry. Trash has to be removed; medical care and rudimentary security provided—to which ends a dozen or more committees may toil night and day. But for the individual occupier, one problem often overshadows everything else, including job loss, the destruction of the middle class, and the reign of the 1 percent. And that is the single question: Where am I going to pee?

Some of the Occupy Wall Street encampments now spreading across the US have access to Port-o-Potties (Freedom Plaza in Washington, DC) or, better yet, restrooms with sinks and running water (Fort Wayne, Indiana). Others require their residents to forage on their own. At Zuccotti Park, just blocks from Wall Street, this means long waits for the restroom at a nearby Burger King or somewhat shorter ones at a Starbucks a block away. At McPherson Square in DC, a twentysomething occupier showed me the pizza parlor where she can cop a pee during the hours it’s open, as well as the alley where she crouches late at night. Anyone with restroom-related issues—arising from age, pregnancy, prostate problems, or irritable bowel syndrome—should prepare to join the revolution in diapers.

Of course, political protesters do not face the challenges of urban camping alone. Homeless people confront the same issues every day: how to scrape together meals, keep warm at night by covering themselves with cardboard or tarp, and relieve themselves without committing a crime. Public restrooms are sparse in American cities—”as if the need to go to the bathroom does not exist,” travel expert Arthur Frommer once observed. And yet to yield to bladder pressure is to risk arrest. A report entitled “Criminalizing Crisis,” to be released later this month by the National Law Center on Homelessness and Poverty, recounts the following story from Wenatchee, Washington:

Toward the end of 2010, a family of two parents and three children that had been experiencing homelessness for a year and a half applied for a 2-bedroom apartment. The day before a scheduled meeting with the apartment manager during the final stages of acquiring the lease, the father of the family was arrested for public urination. The arrest occurred at an hour when no public restrooms were available for use. Due to the arrest, the father was unable to make the appointment with the apartment manager and the property was rented out to another person. As of March 2011, the family was still homeless and searching for housing.

What the Occupy Wall Streeters are beginning to discover, and homeless people have known all along, is that most ordinary, biologically necessary activities are illegal when performed in American streets—not just peeing, but sitting, lying down, and sleeping. While the laws vary from city to city, one of the harshest is in Sarasota, Florida, which passed an ordinance in 2005 that makes it illegal to “engage in digging or earth-breaking activities”—that is, to build a latrine—cook, make a fire, or be asleep and “when awakened state that he or she has no other place to live.”

It is illegal, in other words, to be homeless or live outdoors for any other reason. It should be noted, though, that there are no laws requiring cities to provide food, shelter, or restrooms for their indigent citizens.

The current prohibition on homelessness began to take shape in the 1980s, along with the ferocious growth of the financial industry (Wall Street and all its tributaries throughout the nation). That was also the era in which we stopped being a nation that manufactured much beyond weightless, invisible “financial products,” leaving the old industrial working class to carve out a livelihood at places like Walmart.

As it turned out, the captains of the new “casino economy”—the stock brokers and investment bankers—were highly sensitive, one might say finicky, individuals, easily offended by having to step over the homeless in the streets or bypass them in commuter train stations. In an economy where a centimillionaire could turn into a billionaire overnight, the poor and unwashed were a major buzzkill. Starting with Mayor Rudy Giuliani in New York, city after city passed “broken windows” or “quality of life” ordinances making it dangerous for the homeless to loiter or, in some cases, even look “indigent,” in public spaces.

No one has yet tallied all the suffering occasioned by this crackdown—the deaths from cold and exposure—but “Criminalizing Crisis” offers this story about a homeless pregnant woman in Columbia, South Carolina:

During daytime hours, when she could not be inside of a shelter, she attempted to spend time in a museum and was told to leave. She then attempted to sit on a bench outside the museum and was again told to relocate. In several other instances, still during her pregnancy, the woman was told that she could not sit in a local park during the day because she would be “squatting.” In early 2011, about six months into her pregnancy, the homeless woman began to feel unwell, went to a hospital, and delivered a stillborn child.

Well before Tahrir Square was a twinkle in anyone’s eye, and even before the recent recession, homeless Americans had begun to act in their own defense, creating organized encampments, usually tent cities, in vacant lots or wooded areas. These communities often feature various elementary forms of self-governance: food from local charities has to be distributed, latrines dug, rules—such as no drugs, weapons, or violence—enforced. With all due credit to the Egyptian democracy movement, the Spanish indignados, and rebels all over the world, tent cities are the domestic progenitors of the American occupation movement.

There is nothing “political” about these settlements of the homeless—no signs denouncing greed or visits from left-wing luminaries—but they have been treated with far less official forbearance than the occupation encampments of the “American autumn.” LA’s Skid Row endures constant police harassment, for example, but when it rained, Mayor Antonio Villaraigosa had ponchos distributed to nearby Occupy LA.

All over the country, in the last few years, police have moved in on the tent cities of the homeless, one by one, from Seattle to Wooster, Ohio, Sacramento to Providence, in raids that often leave the former occupants without even their minimal possessions. In Chattanooga, Tennessee, last summer, a charity outreach worker explained the forcible dispersion of a local tent city by saying: “The city will not tolerate a tent city. That’s been made very clear to us. The camps have to be out of sight.”

What occupiers from all walks of life are discovering, at least every time they contemplate taking a leak, is that to be homeless in America is to live like a fugitive. The destitute are our own native-born “illegals,” facing prohibitions on the most basic activities of survival. They are not supposed to soil public space with their urine, their feces, or their exhausted bodies. Nor are they supposed to spoil the landscape with their unusual wardrobe choices or body odors. They are, in fact, supposed to die, and preferably to do so without leaving a corpse for the dwindling public sector to transport, process, and burn.

But the occupiers are not from all walks of life, just from those walks that slope downwards—from debt, joblessness, and foreclosure—leading eventually to pauperism and the streets. Some of the present occupiers were homeless to start with, attracted to the occupation encampments by the prospect of free food and at least temporary shelter from police harassment. Many others are drawn from the borderline-homeless “nouveau poor,” and normally encamp on friends’ couches or parents’ folding beds.

In Portland, Austin, and Philadelphia, the Occupy Wall Street movement is taking up the cause of the homeless as its own, which of course it is. Homelessness is not a side issue unconnected to plutocracy and greed. It’s where we’re all eventually headed—the 99 percent, or at least the 70 percent, of us, every debt-loaded college grad, out-of-work school teacher, and impoverished senior—unless this revolution succeeds.

Barbara Ehrenreich, TomDispatch regular, is the author of Nickel and Dimed: On (Not) Getting By in America (now in a 10th anniversary edition with a new afterword).