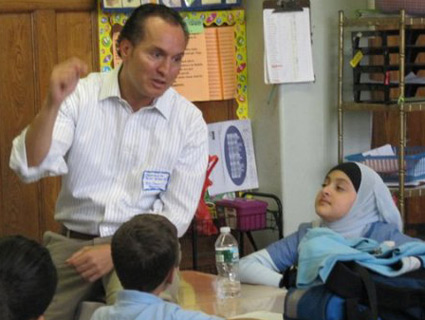 When the Associated Press’ story on the CIA-assisted NYPD surveillance program targeting the city’s Muslim enclaves first broke in August, City Councilman Peter Vallone Jr. dismissed concerns about oversight out of hand, telling WNYC that “We have done extensive oversight of the NYPD’s terror activities and that oversight includes confidential briefings by the commissioner to myself… So they left all of that out of the article.”

Since then, the AP has done several pieces following up on its original reporting—prompting some harsh questioning of NYPD Commissioner Ray Kelly in a recent city council meeting and a lawsuit from the New York Civil Liberties Union. Now Vallone is saying that the City Council actually can’t oversee the NYPD.

Peter Vallone, the chairman of the council’s Public Safety Committee, said the council doesn’t have the power to subpoena the NYPD for its intelligence records. And even if it did, he said the operations are too sophisticated for city officials to effectively oversee. More oversight is likely needed, he said, perhaps from the federal government. “That portion of the police department’s work should probably be looked at by a federal monitor,” he said after Police Commissioner Raymond Kelly testified Thursday at City Hall.

Despite the breadth of the NYPD’s operational capabilities—in a bafflingly uncritical 60 Minutes profile that included an exaggerated claim about the NYPD’s um, anti-aircraft capabilities, Kelly bragged that the NYPD actually has agents in foreign countries collecting intelligence—there really isn’t any established system of oversight comparable to the one that exists for federal law enforcement and intelligence agencies. The CIA began an Inspector General investigation into its own connection to the program shortly after its existence was revealed by the AP.

Vallone’s statement is a departure from his earlier statements suggesting there’s “nothing to see here,” but Faiza Patel, Co-Director of the Liberty and National Security Program at the Brennan Center, says that federal oversight is not an appropriate solution.

“If you’re going to have a counterterrorism force that is so sophisticated, then you have to have an equally sophisticated oversight method, it’s irresponsible if you don’t,” Patel says. “The U.S. has a decentralized system of policing where local police are accountable to local populations. that’s the way our system works. At the end of the day, the NYPD, despite its counterterrorism operations, is a local police force.” Patel offered one caveat: It’s possible that the federal government could oversee the NYPD in some circumstances, such as when NYPD officers are stationed in foreign countries.

The only possible model for the kind of federal intervention Vallone is talking about is the kind that occurs through a consent decree, such as the one being hammered out by New Orleans and the Justice Department following an investigation that revealed massive, systemic abuse of civil rights by the New Orleans Police.

Given that the NYPD’s position is that the AP is mischaracterizing the nature of its counterterrorism efforts, which department officials claim is consistent with the law and civil liberties protections, a consent decree is probably not what Vallone had in mind.

UPDATED: Vallone’s Office sent over a statement saying that the AP took his remarks out of context:

“The ‘portion’ I was referring to was the overseas activities of the NYPD which NYC money is not used to fund. I have stated multiple times that those activities are a new frontier in local law enforcement and new oversight methods need to be looked at, including federal. I have not and will not call for any additional federal monitors for the NYPD’s activities in New York City.”