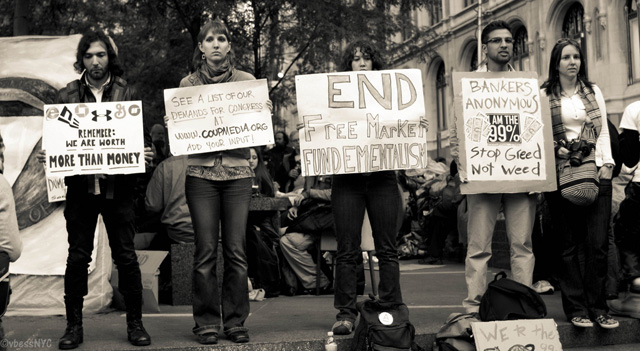 Protesters hold signs in Zuccotti Park. VBlessNYC/Flickr“What is our one demand?”

That question, put forth by one of the original and most iconic posters advertising the occupation of Zuccotti Park, still hasn’t been answered. Many veteran occupiers believe that making specific demands would be counterproductive, while others are working hard to craft concrete proposals they think everyone can agree on.

One of the latter is Eric Lerner, a middle-aged physicist and active member of Occupy Wall Street’s Demands Working Group, which on Sunday voted to push for a New Deal-style work program funded largely by ending America’s wars and taxing the rich. “I think among the general public, this would have enormous support,” Lerner says. “The biggest need in this country and in the world at this time is jobs.”

“We are talking about direct public employment, where you are working for the government—everything from wielding a shovel to educating engineers,” says Lerner, who drew inspiration from the Depression-era Civil Work and Works Progress Administrations. The 35 members of the Demands Group will vote Tuesday afternoon on how to build support for the plan before taking it up with the General Assembly, the open-ended group that serves as the protest’s governing body.

Given that Occupy Wall Street is the first, largest, and most high-profile of the dozens of occupations around the country, any demand that it adopts could have a major impact on the movement. But it’s not all clear whether Lerner’s demand, or any demand, for that matter, will make the cut.

“If anyone is attempting to speak for OWS, that’s bullshit,” said a red-haired protester who goes by the name Ketchup.

“That whole big desire for demands is something people want to use to co-opt us,” said a longtime camper with red glasses and red hair who goes by the name Ketchup. She was speaking yesterday afternoon across the street from Zuccotti Park to a meeting of occupiers that she’d organized to fight the Demand group’s plan. “If anyone is attempting to speak for OWS, that’s bullshit,” she said, noting that organizers of the Demands group hadn’t spent much time at the park or respected its meetings. She supports the competing Liberty Square Blueprint, a kitchen-sink manifesto that eschews demands for loosely defined goals.

The Liberty Square Blueprint is a wiki page edited by some 250 occupiers and still undergoing changes. It emerged two weeks ago out of Occupy Wall Street’s Open Source Working Group, a collection of mostly young, tech-savvy occupiers. “This document outlines our vision, goals, and strategy to best support the global movement, which will inevitably succeed,” notes the introduction to the current draft. “Demands cannot reflect inevitable success. Demands imply condition, and we will never stop. Demands cannot reflect the time scale that we are working with.”

The blueprint’s 11 core “visions” for the movement include broad concepts such as embracing open-source technology, ending all wars, eliminating “discrimination and prejudice,” and reappropriating “our business structures and culture, putting people and our earth before profit.” It goes on to list goals for New York City, including, “Make NYC the open source Silicon Alley” and “Make NYC a pioneer in urban farming,” and “Make NYC a functioning focal point for people’s assemblies to dissolve and overcome the shaddow [sic] government of big banks and corporations that is embedded there.”

Ted Hall, a veteran camper involved in the blueprint, says its creators wanted to focus on “our local resources, our local politics, and economic levers that are here in New York.” He hoped other occupy groups would focus on issues relevant to their own cities. National politics could be the job of Occupy DC.

Hall is regarded with respect by many at Occupy Wall Street and is also well known for his eccentric attire, which yesterday included a multicolored hat and leggings, a bolo tie, a regular tie, Native American beads, a suit coat worn under a flannel shirt, and socks but no shoes. He pointed out that two or three past efforts to pass a set of OWS demands had failed (though the movement has passed an eight-point list of “points of unity“). “They did not have a broad enough base to work through,” he figured. “They didn’t gather enough perspectives and they weren’t thorough enough.”

Even if neither the blueprint nor the New New Deal goes anywhere with the larger crowd, they could still help Occupy Wall Street figure out what it wants to be. In many respects, they represent two idealistic extremes: a fairly concrete set of national policy proposals, and a looser, more localized set of goals. The ultimate consensus at Zuccotti Park may end up somewhere in the middle.