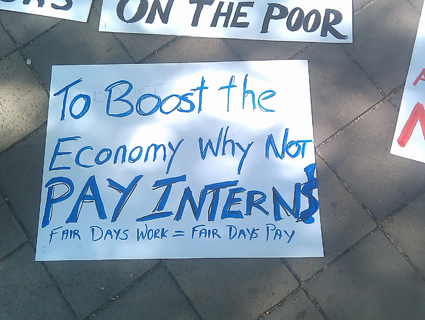 "To boost the economy, why not pay interns?" Why not? MoJo does it.Photo by Tim Murphy

As Andy Kroll reported this morning, the three-week-old #OccupyWallStreet movement has risen out of many of the same grievances that sparked massive protests at the Wisconsin state capitol. In some cases, as I discovered on Thursday at a satellite demonstration in DC, it even includes the same group of people.

Chad Bucholtz drove to DC (“crammed in like sardine cans”) along with 14 others from Wisconsin to attend the rally. A veteran of the union demonstrations in Madison last February, he sees the 99-percent movement as a direct continuation of those efforts. “I see a lot of similarities; in Madison it wasn’t just Democrats, it was Democrats and Republicans—maybe former Republicans,” said Bucholtz, a student at UW–Milwaukee. “It was both the left- and right-wing people that recognized that the corporate influence of Koch Industries was pretty much buying policies.” He politely disagrees with skeptics who say the movement hasn’t articulated any specific goals: “We need a constitutional amendment to clarify that money is not free speech,” he says. “My opinion is that the root [of the problem] is money buying politics.”

Carrie Scherpeltz of Madison, another veteran of the Wisconsin demonstrations, said she expected about 100 Wisconsinites were on there way to show their support. “We were a spark; I personally want to fan it.” Her message: “De-rig our economy. They’ve been rigged in favor of corporatocracy and against the people.”

About 200 protesters—a mix of peace activists, union members, college students, and Wisconsin vets—descended on Freedom Plaza, a stone’s throw from the White House, for a joint demonstration held by Occupy K Street (camping out for last week in McPherson Square) and the anti-war, anti-austerity group Stop the Machine. The protesters I spoke with were coherent in their ideas, if not necessarily in agreement. Wendy Penn had attended five #OccupyWallStreet protests in the last two weeks, including the march across the Brooklyn Bridge last Sunday when more than 700 protesters were arrested. She came to DC from Queens on Thursday to spread a message that’s decidedly different from what you find on the “We Are the 99 Percent” Tumblr:

“People: Take responsibility for your own lives,” Penn said. “Figure out with each other and on your own how to take care of your food, your health, and your education. Because these people that are in power right now, they might be throwing you a few bones to keep you happy for a little while, but in the end it’s destroying everything.” Unlike her parents’ or grandparents’ generations, Penn doesn’t have any faith in the ability of government to fix itself; in her view, we might as well cut our losses.

On a whim, Lourdes Barallobre flew up from Miami for the rally with a friend, and plans to camp out at MacPherson square for the next three days. A senior at Florida International University, she’s swamped in student loan debt and wants to do something about it. “I would like for Americans to see what’s really going on. I would love to hear the President acknowledge what’s going on, which we have yet to see.” (On Thursday, President Obama commented on the movement for the first time, stating that it stems from “broad-based frustration.”)

As with any large gathering, there was no shortage of dissonant groups: Code Pink had a large enclosure in the center of the square, meshing its notorious anti-war message with a call for a halt on foreclosures. Towards the back, a band of LaRouchies had gathered to hand out literature explaining why President Obama is a lot like Hitler. If most of the attendees I spoke with were polite and articulate, the same couldn’t be said for everyone on stage. One speaker expressed his contempt for corporate America thusly: “Go fuck yourselves” (see below).

Asked about the comparison, raised by Jon Stewart and others, to the first tea party rallies in 2009, most of the attendees I spoke with demurred. “This is not a left or right issue,” said Ashley Lowe of DC, who took a day off from her job at a nonprofit to attend the rally. “I really want to keep the political warfare out of it, as much as possible.” But while the content—stray Ron Paul placards notwithstanding—couldn’t be any more different than the Showdown in Searchlight, it was tough not to notice the backdrop the two movements shared: A 30-foot-wide image of the preamble to the Constitution that may as well have been borrowed, just for the day, from a Tea Party Patriots tax-day rally.