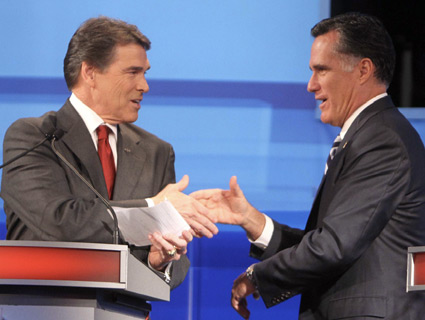 Ever get the feeling that Rick Perry’s oppo research team has been failing him? During Tuesday night’s tense CNN debate in Las Vegas, the Texas governor took Mitt Romney to task for the “hypocrisy” of trying to appear tough on illegal immigration, while also having allegedly hired undocumented workers to tend to his posh estate in Belmont, Massachusetts.

Referencing a series of reports published by the Boston Globe in 2007, Perry had this to say about his fellow GOP contender: “Mitt, you lose all of your standing in my perspective for hiring illegals in your home and knowing about it for a year. And the idea that you stand here before us and talk about your strong record on immigration is, on its face, the height of hypocrisy.” Romney laughed off the attempted smear and said that he never “hired an illegal in my life,” before the two went on to trade remarks on the matter. Here’s video of their exchange:

Unfortunately for the increasingly faltering Perry, his latest barb for Romney turned out to be a cheap shot that—given the angry groans and hissing from the audience—Perry couldn’t even pull off. By rehashing this nearly four-year-old quasi-controversy, Gov. Perry opened himself up to an easy rebuttal: According to the Globe‘s exposé, Romney did hire Community Lawn Service With a Heart, a landscaping company that had a track record of employing illegal immigrants, for services like “raking leaves, clearing debris from Romney’s tennis court, and loading the refuse onto [their] truck.” He did not, however, directly or (according to Romney) knowingly hire any undocumented workers, and dumped the company after the Globe broke the story. After hearing the news, the Romney ’08 campaign issued the following statement:

[The company was] instructed to make sure people working for [them] were of legal status. We personally met with the company in order to inform them about the importance of this matter. The owner of the company guaranteed us, in very certain terms, that the company would be in total compliance with the law going forward. The company’s failure to comply with the law is disappointing and inexcusable, and I believe it is important I take this action.

Whether Romney was telling the whole story or not (Ricardo Saenz, the company’s owner, had a different version of the facts), PolitiFact.com ruled on this controversy years ago and concluded that then-candidate Romney deserved “a little slack for doing what most Americans would do and rely on the legal status of the company hired to do the job.” Objectively speaking, Romney’s yard-work-gate is, at worst, an example of bad household oversight—not exactly the kind of criminal exploitation the Perry campaign was surely banking on.