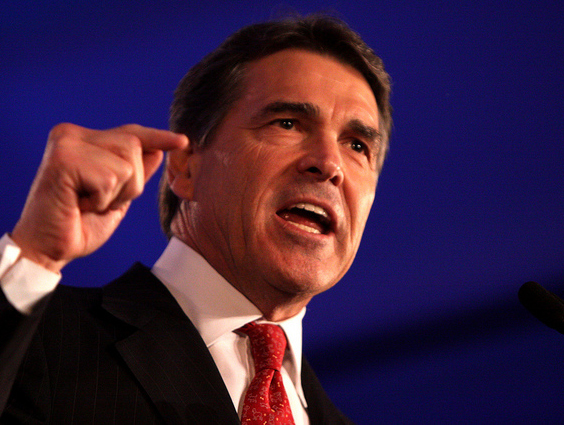 For all of Texas Gov. Rick Perry’s jeremiads against big government and evil regulations, his state won a few admirers during the housing bubble for its surprisingly tough lending laws. Not that Perry didn’t try to lure subprime lenders to Texas, plying them with tens of millions in taxpayer cash just as they ramped up their risky home lending.

In the mid-2000s, the Associated Press reports, Perry enticed then-booming lending giants Countrywide Financial and Washington Mutual with $35 million in state tax grants to grow their operations in Texas and create 11,000 new jobs. At the same time, those lenders were diving headlong into more risky lending, while the Perry administration dismissed the risks of subprime mortgages as blown out of proportion. The source of Perry’s hand-outs to Countrywide and Washington Mutual was the Texas Enterprise Fund, a multi-billion-dollar economic development honeypot that critics have blasted as a slush fund used to funnel money to political allies and donors.

Here’s more from the AP:

The AP analysis found that Washington Mutual, Countrywide, and their subsidiaries boosted risky lending in Texas within a year after receiving grants from the Texas Enterprise Fund. In 2004, only one out of every 100 Washington Mutual loans in the state was originated to homeowners with less-than-perfect credit. The next year, that figure rose to more than one in four.

Countrywide’s lending volume also boomed. In 2004, 14 percent of the company’s loans in the state were given to high-risk borrowers, but the following year—when Countrywide received its first $10 million disbursement from the fund—the rate of risky loans jumped to nearly one in three, the AP’s analysis found. Texas ranked No. 3 for the number of risky mortgages underwritten by Countrywide, behind only Florida and California.

Countrywide pledged to create thousands of new jobs, but later shed more than that in nationwide layoffs. That came as Countrywide and WaMu gave checks to Perry’s re-election campaign, including $2,500 from WaMu’s political action committee as late as March 2008. The companies gave more than $15,000 in total contributions, state records show.

Meanwhile, Countrywide faced problems in Texas. Perry’s own attorney general reached an agreement with the lender in 2008 that would give millions to customers who lost their homes to foreclosure. The attorney general’s office began its investigation that year amid allegations that Countrywide encouraged homeowners to accept loans they could not afford.