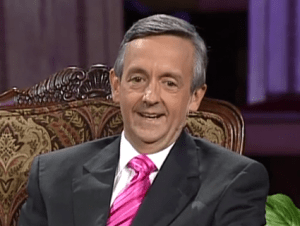 Dallas pastor Robert Jeffress says that he is not going to be Rick Perry’s Jeremiah Wright. That’s probably true. But Jeffress, who introduced Perry at the Values Voter Summit on October 7, certainly isn’t doing the Texas governor any favors with his argument that Mitt Romney belongs to a cult (Mormonism) and holds religious views that should be held against him at the polls this winter. Jeffress’s appearance on-stage was approved by the Perry campaign, according to the event’s organizer, Family Research Council president Tony Perkins.

It’s only getting worse. Alex Burns flags comments Jeffress made at his church on Sunday that, “Islam, Hinduism, Buddhism and Mormonism are all false religions and I stand by those statements.” But Jeffress left one major world religion out: Judaism. That wasn’t always the case. Here’s what he said in his Politically Incorrect lecture series in 2010:

God sends good people to Hell. Not only do religions like Mormonism, Islam, Judaism, Hinduism—not only do they lead people away from from God, they lead people to an eternity of separation from God in Hell. You know Jesus was very clear: Hell is not only going to be populated by murderers, and drug dealers, and child dealers; Hell is going to be filled with good religious people who have rejected the truth of Christ.

Catholicism, though, has it even worse in Jeffress’ eyes. As he explained on his television show Pathway to Victory in 2010, the Catholic Church is an instrument of Satan designed to steer adherents straight to Hell:

And that’s what Satan does with counterfeit religion. He uses, he steals, he appropriates all of the symbols of true biblical Christianity, and he changes it just enough in order to cause people to miss eternal life.

The enormous qualifier, obviously, is that if Jeffress believed that Judaism, Buddhism, Islam, Hinduism, or Catholicism was the one true religion, he would have converted to one of those faiths by now. Picking a faith is an inherently discriminatory practice. But the argument Jeffress made on Friday is that Christians should apply their own religious test to candidates and elevate “true born-again Christians” above all other contenders. Comments like these, along with his statement that Islam is “evil” and causes pedophilia in its inherents, are only going to continue to fuel questions about what, exactly, the Perry campaign was thinking when it welcomed Jeffress’s endorsement.