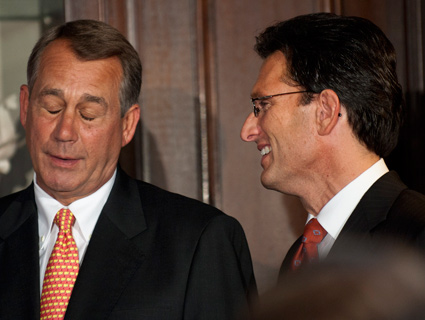 This week, Congress is expected yet again to take up a balanced budget amendment (BBA) proposal. The measure would require Congress to submit a balanced budget every year, no matter how the economy is faring. (Robert Greenstein and Richard Kogan of the Center on Budget and Policy Priorities (CBPP) have the details.)

An earlier BBA reported by the House Judiciary Committee in June would have limited federal spending to 18 percent of economic output (which is never clearly defined) without a three-fifths vote in both the House and Senate, and would require a two-thirds vote to raise taxes.

Bruce Bartlett, a former budget advisor for Ronald Reagan and George H.W. Bush, reminds us that there’s a reason why a balanced budget amendment has never been able to garner enough Congressional support to become law: it’s a terrible idea. As Bartlett explains, 18 percent of GDP (if that’s what economic output refers to) is a completely arbitrary number, one that couldn’t be reached this year even by cutting every federal program other than Social Security, Medicare, national defense, and paying interest on the debt.

The balanced budget concept dates back to the country’s early years, when the Founding Fathers’ concerns over rising deficits and the potential for catastrophic hyperinflation led them to assume that the notion of not spending more than you take in was, essentially, self-evident. As a result, the budget was more or less balanced until the 30s, when the Great Depression made balanced budgets impossible and Keynesian economic theory brought deficit spending into vogue.

Ever since, conservatives have railed against big spending liberal policies as a “vast expansion of government. . . financed by seemingly costless deficits.” Bartlett is sympathetic to that view, arguing that “[i]f people knew their taxes would go up or they would lose government benefits whenever spending increased, we would have a lot less spending.” But then:

Unfortunately, conservatives intentionally destroyed the remnants of the implicit balanced budget constraint in the 1970s so they could cut taxes without having to cut spending at the same time. Finding enough spending cuts to pay for big tax cuts would have doomed their efforts, so they concocted a theory, “starve the beast,” to maintain a fig leaf of fiscal responsibility.

Under this theory, deficits are intentionally created by tax cuts, which puts political pressure on Congress to cut spending. Thus, cutting taxes without cutting spending became the epitome of conservative fiscal policy. Unfortunately, it didn’t work.

We gave starve-the-beast theory a test during the Reagan administration, but as I have shown previously, when push came to shove, Reagan was always willing to raise taxes rather than allow deficits to get out of control.

We gave starve-the-beast theory another test during the George H.W. Bush and Clinton administrations. They both raised taxes and, according to the theory, this should have caused spending to rise, because tax increases feed the beast. But they didn’t. Spending as a share of the gross domestic product fell to 18.2 percent in 2000 from 22.3 percent in 1991, according to the Congressional Budget Office.

We gave starve-the-beast theory another test during the George W. Bush administration. Taxes were slashed, but spending rose – again, the exact opposite of what the theory said should have happened. The economist Bill Niskanen asserted that the result was not surprising because the Republican position on taxes effectively reduced the tax cost of spending.

Nevertheless, conservatives like Grover Norquist insist that starve-the-beast theory works, which is why they relentlessly push for still more tax cuts despite the obvious failure of previous tax cuts either to stimulate economic growth or restrain spending, and oppose even the most trivial tax increases no matter how big the deficit.

Bartlett’s conclusion: if the GOP cared about balancing the budget, it would back commensurate policies, like higher taxes and stricter controls on tax cuts—the same measures that brought spending in line in the 1990s.