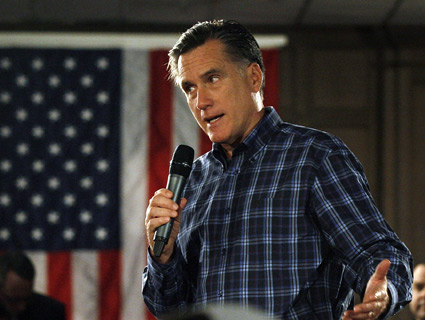 When asked about Iran and Israel at Tuesday’s CNN national security debate, on-and-off Republican front-runner Mitt Romney replied in his typically tough, unambiguously pro-Israel fashion. After chiding the Obama administration for being “disrespectful to our friends” and playing softball with our foes, Romney said that as president he would take the necessary steps to confront the Iranian regime. One of the hallmarks of his plan: indicting Iranian President Mahmoud Ahmadinejad for “violating the genocide convention.” (During the debate, Romney first said “Geneva Conventions” before backtracking and going with “genocide convention.”)

You could give Romney the benefit of the doubt, and assume that he actually did mean to say the “Geneva Conventions” and that, under the pressure of a nationally televised debate, he merely misspoke. But Romney simply meant what he meant; he has been calling for this indictment since at least the end of 2007. Here’s an AP report from September of that year:

“The Iranian regime under President Ahmadinejad has spoken openly about wiping Israel off the map, has fueled Hezbollah’s terror campaign in the region and around the world and defied the world community in its pursuit of nuclear weapons — capabilities that make these threats even more ominous,” Romney said in a letter to U.N. Secretary General Ban Ki-moon posted on his campaign Web site, www.mittromney.com.

In New York, Romney told reporters: “I think the invitation should be withdrawn. I think instead, Ahmadinejad should be indicted under the Genocide Convention.”

Because Romney has been calling for this indictment since before Iran’s bloody Green Movement protests, it’s safe to assume that he was specifically referring to the Iranian President’s over-the-top, alleged call for Israel to “be wiped off the map.”

And here’s where candidate Romney again steps into the murky waters of international law: The Convention on the Prevention and Punishment of the Crime of Genocide, as adopted by the United Nations General Assembly in the years after World War II, defines genocide as any number of “acts committed with intent to destroy, in whole or in part, a national, ethnical, racial or religious group.”

Experts in the field cite an array of factors that would almost certainly impede Romney’s proposed foreign policy initiative. “There are so many layers to [Romney’s] argument that need to be explored because the implications are very serious,” says Elizabeth Blackney, an anti-genocide activist and author. Blackney also argues that before any potential Romney administration can determine if Ahmadinejad’s comments or threats would justify US support for an indictment, the former Massachusetts governor needs to elaborate on his plans. “US policy has been to not honor the International Criminal Court; we are not a signatory to the Rome Treaty. So is Romney signaling that he would recommend law enforcement under the [statute]… and fundamentally change American policy toward the ICC and the Genocide Convention? [His comment during the debate] was not very well thought out.”

While there have been other voices arguing in favor of such an indictment, it’s widely interpreted that a statement supposedly egging on genocide is not legally considered a tool of genocide, unless it can be taken into evidence as proving direct intent and premeditation. Furthermore, it would be unprecedented to indict a foreign leader for a genocide that hasn’t even taken place yet.