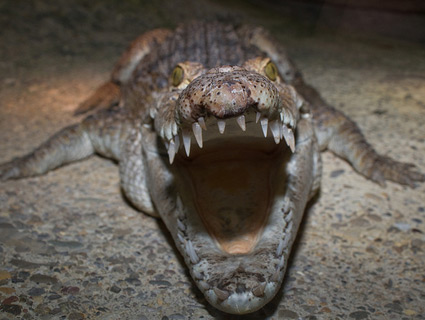 If Barack Obama were attacked by a man-eating crocodile during this week’s visit to Australia, you’d think that his life would be worth significantly more than $51,000, right?

Obama will be the fifth president to visit…Australia, and his flying two-day visit will take in the staid capital Canberra as well as the Northern Territory town of Darwin, in the heart of “Crocodile Dundee” country.

Local firm TIO has snapped up the opportunity to insure the high-profile visitor, issuing a [sic] him with a Crocodile Attack Insurance policy which will pay out Aus$50,000 (US$50,870) if the president is fatally attacked by a reptile. …

The company, which has been providing crocodile cover for more than 20 years, hopes to present a framed copy of the policy — which features a menacing photo of the deadly predator — to Obama in Darwin on Thursday.

Just to be perfectly clear, if the Secret Service can’t prevent this from happening to the President of the United States…

Thankfully, the chances of anyone (leader of the free world, or not) getting terminally wrecked by a croc in Australia are fairly slim, with an average of two reported fatalities each year. And if this BBC headline from summer 2010 is any indication—”Australian drunk survives attempt to ride crocodile“—Obama will have to do a little more than just show up to get assassinated by an Aussie crocodile.