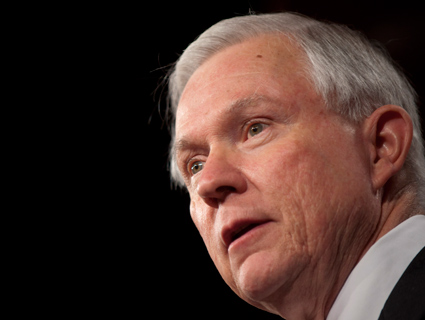 A war has ignited between the Justice Department and several states over their controversial new immigration laws, and Republican senators are stepping into the fray, looking to prevent the Obama administration from challenging these laws as unconstitutional. Sen. Jeff Sessions (R-Ala.)—with cosponsors Jim DeMint (R-S.C.) and David Vitter (R-La.)—will soon introduce legislation that would prevent the Justice Department from filing lawsuits against the state laws.

At issue: a slate of harsh, new, GOP-authored immigration laws in South Carolina, Alabama, Georgia, Indiana, and Utah that are largely modeled on the controversial immigration measure passed in Arizona last year. That law made it illegal not to carry one’s immigration documents, gave law enforcement officials the green light to detain anyone suspected of being an undocumented immigrant, and made it a state crime to reside in the US illegally.

Since then, various states have approved copycat laws, attempting to dictate immigration policy in lieu of comprehensive federal reform. And the feds have struck back. The Justice Department sued Arizona over its law, and the more controversial elements were blocked by a US district court. A federal court in Alabama, meanwhile, has blocked parts of that state’s law. And in October, the DOJ filed a lawsuit against South Carolina, whose bill is scheduled to go into effect January 1.

Sessions, DeMint, Vitter, and their supporters argue that when it comes to immigration, the federal government has fallen down on the job, forcing the states to step into the breach. They blast the DOJ’s actions as an egregious assault of states’ rights. Vitter calls the DOJ challenges nothing but “politically driven lawsuits.” The agency, Sessions says, “needs to stop going after states that are taking steps in harmony with federal laws to see that our immigration laws actually are enforced.”

The law passed in Sessions’ home state of Alabama is widely regarded as even harsher than Arizona’s. It blocks undocumented immigrants from receiving state or local public benefits, prevents them from enrolling in public colleges, bars them from renting property, and requires public school officials to verify their students’ immigration statuses.

To investigate whether the law violates the Civil Rights and the Equal Educational Opportunities Act—which gives US resident children the right to attend public school regardless of nationality—Assistant Attorney General Thomas Perez requested access to enrollment records in the state’s school districts with large Latino populations and information on students who may have withdrawn from school since the law went into effect. But Alabama officials refused to comply with the request, arguing that the feds have “no legal authority to compel production” of education records. State Attorney General Luther Strange instructed Alabama education officials not to cooperate, and he asked Perez to prove he possessed the authority to request state education records. “Otherwise, I will assume you have none, and will proceed accordingly,” Strange wrote to Perez.

Sessions’ bill would codify the states’ intransigence. “It’s hard not to see this as bell-whistle politics, this kind of call to let the states go their own way,” Marshall Fitz, the director of immigration policy at the Center for American Progress, says. “The only reason they’re doing this is to say, ‘We stand with Alabama,’ ‘We stand with Arizona,’ and ‘We stand with South Carolina.’ And by doing that, they’re emboldening the kind of nativism that has unfortunately led to a moral and humanitarian crisis that we’re seeing in Alabama right now.”

Frank Sharry, executive director of America’s Voice, an immigration reform group, says that Sessions’ proposed bill smacks of hypocrisy. “Sessions, Vitter, and DeMint are three of the senators most responsible for stopping federal immigration reform. Then they blame Washington for not solving the problem and defend states for taking federal law into their own hands,” Sharry says.

Fitz and Denise Gilman, an immigration law expert at the University of Texas, fully expect the DOJ standoff to reach the Supreme Court. “The Justice Department felt it had to step in and engage in some litigation, both as a means of communicating the federal government’s position on this kind of legislation…and to resolve the legal issue. The Supreme Court will determine what is permissible and what is not permissible for states to do in terms of immigration policy,” Gilman said.

But while the Sessions bill sends a message to states, the DOJ intends to continue sending messages of its own. In an email to Mother Jones, a Justice Department spokesperson says that the department will continue to review immigration-related laws like those in Georgia, Indiana, and Utah, to determine whether they interfere with federal law.