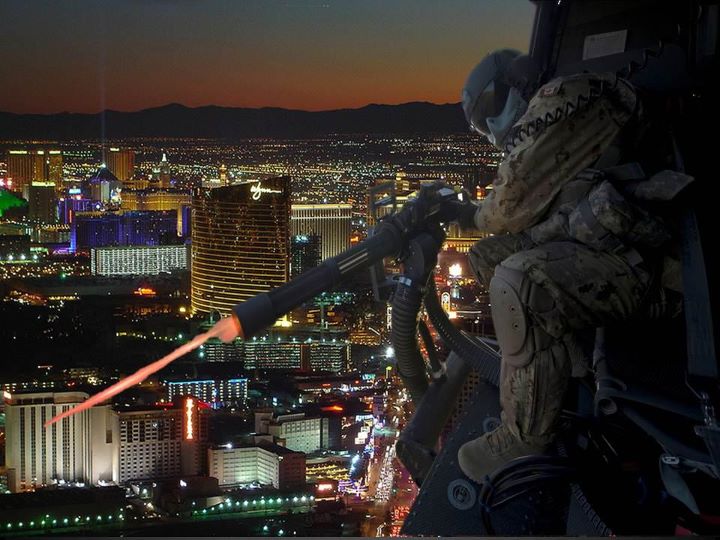 Sometimes, an M249 Squad Automatic Weapon is just an M249 Squad Automatic Weapon. And sometimes, it’s the inspiration for a sexy Las Vegas nightclub. Come December 16, Sin City’s strip will get its latest gentlemen’s club (website: vegasonfullauto.com), where the “champagne room” is a shooting gallery and the go-go dancers are NRA-trained range safety officers. According to the UK’s Daily Mail:

The brainchild of Genghis Cohen, the impresario behind Tabu, an infamous club at the city’s MGM Grand Hotel, Machine Guns Vegas is set to open on December 15.

Situated just behind the Mirage Hotel near the city’s central Strip, Las Vegas’s first “ultra gun lounge” will glamourise the use of firearms.

Guests will be taught how to fire weapons by ‘stunning gun girls’.

“The world is now ready for a ‘Gun Lounge,'” Mr Cohen says. “Stunning ‘Gun-Girls’ trained in gun-handling [will] look after VIP guests.”

Now, in order to comply with a host of laws (yes, they have those in Vegas), Machine Guns Vegas won’t serve alcoholic libations. (No word on whether it will turn away already-intoxicated partiers at the front door.) And presumably it’s got a Federal Firearms License, a pesky requirement for people who want to possess full-automatic guns and other military-style arms. But, Cohen assures the Mail, “Louis Vuitton and Prada accessories for your guns and ammunition are available for purchase,” along with paper shooting targets with likenesses of Osama bin Laden. The phallic firepower will obviously be provided to patrons on a rental basis, but you’ll have to bring your own Viagra, gents. Sorry!

Amazingly, while this takes the sex-and-guns nexus to a whole new level, gun-related tourism is already big business in Vegas. Besides the plethora of gun shops with VIP ranges, your best man can always buy you a “shooting package” for a bachelor’s party to remember. And just a month after Machine Guns Vegas opens, the city will host its annual SHOT Show, a hub for gun enthusiasts and traders that attracts worldwide attention (and, occasionally, massive numbers of federal, state, and local authorities with arrest warrants). This is, after all, the city where Tupac met his end, and where boxer Floyd Mayweather allegedly arranged a firearms ambush for some enemies.

Even so, not all the locals are sold on this particular testosterone-heavy twist on gun culture. “I, for one, don’t get the whole boobs and bikinis thing,” writes Las Vegas Weekly‘s Rick Lax. “Back at the University of Michigan, I dated the president of the College Libertarians, who took me to the firing range. Easily the No. 1 least sexy thing I’ve ever done. Which is good. Arousal is distracting. And the worst time to be distracted is when you’re shooting a gun.”