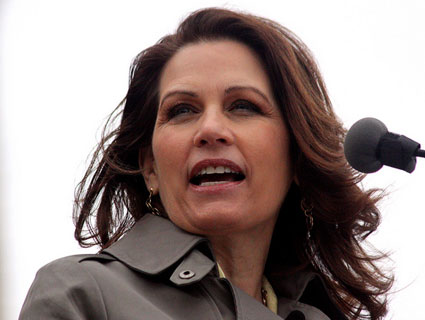 Rep. Michele Bachmann (R-Minn.) has fallen in the presidential polls since winning the Ames Straw Poll in August.<a href="http://www.flickr.com/photos/gageskidmore/5555260956/sizes/z/in/photostream/">Gage Skidmore</a>/Flickr

Cindy Pollard almost left Uncle Nancy’s Coffeehouse in Newton, Iowa, in disgust on Friday when she overheard that Michele Bachmann was about to make a campaign appearance. But Pollard decided to stay after spotting local John Fruetel, who came to tell Bachmann his views on gay rights.

Pollard is chairwoman of the Jasper County Democratic Party. She’s also a lesbian, and married her wife in 2010, about a year after the Iowa State Supreme Court voted unanimously to allow same-sex marriage in the state.

As Pollard recorded a video, Fruetel confronted Bachmann, who was walking around the coffeehouse visiting with about 60 potential supporters individually instead of making a stump speech. “Thanks for your comments,” Bachmann replied, after Fruetel told her she was wrong to oppose same-sex marriage.

“It’s pure bigotry,” Fruetel told me after I noticed the brief exchange from afar. “Why does it matter to these people that they need to legislate the lives of other people?”

But others who turned out to see Bachmann, who won the Ames Straw Poll in August then quickly took a nosedive in the polls, hope a social conservative like the Minnesota congresswoman can reemerge as a contender ahead of Iowa’s January 3 caucuses.

“Bachmann is somebody who’s been on my radar for a long time,” Newton resident Marty Stratton told me. Stratton is also a fan of Rick Santorum, the former Pennsylvania senator who recently received the endorsement of Bob Vander Plaats, the gay marriage foe whose support helped propel Mike Huckabee to victory in Iowa in 2008. Santorum and Bachmann’s brand of family values, Stratton explained, is what Washington needs for the country to get back on track.

“Some of the front-runners seem to be too closely aligned with the political atmosphere in Washington,” Stratton added, referring specifically to Newt Gingrich. He’d also prefer not to see Ron Paul win Iowa, because his supporters “come from both extremes, left and right, and that’s what gets us in trouble.”

In an email Thursday, the Bachmann campaign claimed the congresswoman was in a ??”statistical dead heat for the Iowa caucuses,” pointing to December 20 figures from automated pollster We Ask America. That poll placed Bachmann in fourth place with 15 percent, only four points behind Ron Paul, who came in first in the poll with 19 percent. But We Ask America’s result was markedly different from Real Clear Politics’ polling average, which puts Bachmann in fifth place, about 15 points behind Paul.

Rick Perry, another former Iowa front-runner, came in fifth with 11 percent in the We Ask America poll, in line with his RCP average. Perry campaigned in Newton Thursday, repeating his support for a part-time Congress and promising to make the repeal of Obamacare a top priority.