It began with bunker-busters exploding along the banks of the Tigris on live TV in 2003. It officially ended Thursday, with a simple flag ceremony. Between these events, America’s war in Iraq roiled the world. Here below are the many ways in which Mother Jones investigated and explained the war to our readers over the years. For America, the conflict is now officially over; its impact, of course, will continue to be felt for years to come.

We traveled to Iraq back in 2001—before “shock and awe,” even before 9/11—and put the lie to the idea that Iraqis would ever greet us with flowers and candies.

We traced the origins of America’s “Thirty-Year Itch” to control Mideast oil production…and how it led us to Baghdad.

We told the inside story of “the lie factory,” the Bush administration’s bogus intelligence operation to drum up support for an Iraq invasion. 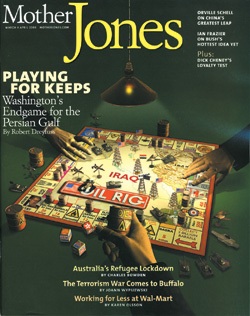 Cover of the March/April 2003 Issue

We considered the rumor that America invaded Iraq not because of oil, but rather to gain control of the ancient “stargates” built in Sumerian ziggurats there.

We introduced readers in 2003 to a little-known player in the security contracting world called Blackwater.

We found Iraq’s real WMD—now dispersed and more dangerous than ever.

We exposed how the feds tried to discredit the first scientific attempt to measure civilian deaths in Iraq.

We took a video tour of Abu Ghraib, charted who was really responsible for the torture there, and got a front-row seat for the military scandal’s farcical last trial.

We explained how Washington sabotaged “the Boy Scout of Baghdad,” Iraq’s top corruption cop, and how the country’s US-friendly leaders enriched themselves at their people’s expense.

We showed how, early on, the military lived in denial that killing Iraqis could trigger PTSD in US soldiers.

We saw what real heroes look like, after they return with bodies broken by battle. 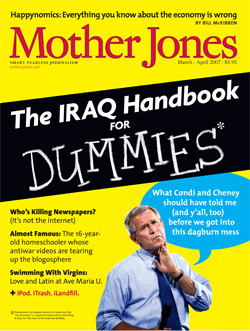 Cover of the March/April 2007 Issue

We chased down another breed of courageous soldiers: the conscientious objectors and war resisters.

We learned that KBR billed Uncle Sam $5 million for a handful of Humvee mechanics who worked as little as 43 minutes a month. Unsurprisingly, the federal government later sued KBR and other contractors for its billing practices in Iraq.

We detailed “the sheikh down“—a plan by US authorities to buy stability in Iraq by tossing billions of dollars at shadowy strongmen. And when the author of that story, Shane Bauer, was kidnapped along with two hiking companions by Iranian authorities, we fought to have them freed. (They were.)

We documented the military’s funny-sad colonial-era cultural lessons for servicemembers in Iraq, complete with Lego-like illustrations.

We described the war’s effect on the abundant animal life of Baghdad, from dogs put to death at Camp Slayer, to the furry (and illegal) US troops’ mascots, to the elusive “Saddam fish,” also known as Iraq’s “Weapon of Bass Destruction.“

We rode shotgun with trigger-pulling military contractors on some of the country’s deadliest roads. 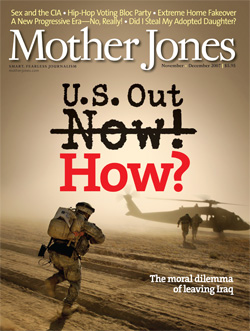 Cover of the November/December 2007 Issue

We taught a multipart course in Iraq 101. First lesson: how the war increased terrorism sevenfold worldwide.

We unearthed an alleged rapist who hid from US authorities for seven years as a military contractor in Iraq.

We contemplated the success of Hurt Locker and the return of the nontriumphant war movie in American culture.

We noted what George W. Bush ended up doing with the “Mission Accomplished” banner.

We tallied what the US has left behind in Iraq—in terms of refugees, wealth, corpses, and international prestige.