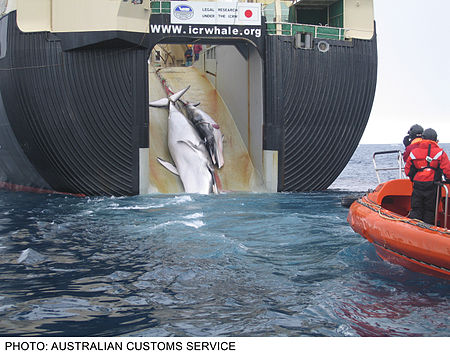 Japan has admitted that some of its disaster funds earmarked for earthquake and tsunami relief will instead go to boost security for its so-called “scientific” whale hunts. The Japan Times reports:

It was a comparatively minor entry in the annual, ritualized battle between pro- and anti-whalers. Japan’s whaling fleet pulled out of Shimonoseki port near Nagasaki earlier this week on its way to another controversial four-month Antarctic cull. In the fine print of the 2011 departure, however, was a PR land mine that would detonate and send ripples across the world. Traveling with the whalers was what the Japanese media called “beefed-up security,” a euphemism for a party of coast guard officers who would ride shotgun in the converted harpoon ship Shonan Maru 2, making sure the fleet achieved its target catch. That vessel gained some notoriety last year when it plowed through the Ady Gil ocean-going speedboat, cutting it in half.

Japan Fisheries Agency officials admitted that about  ¥2.28 billion (US$29 million) would be taken from a ¥500 billion (US$6.4 billion) portion of disaster funds earmarked for fisheries-related spending, approved by Japan’s parliament last month.

These monies apparently went to equip the Shonan Maru 2 with unspecified security equipment designed to win the battle against the Sea Shepherd Conservation Society‘s Ady Gil. This even though 95 percent of Japanese admit to rarely or never eating whale meat and presumably don’t give a damn whether whaling continues.

My question: $29 million for a party of coast guard officers? What else did they send out with the whalers? Torpedoes?