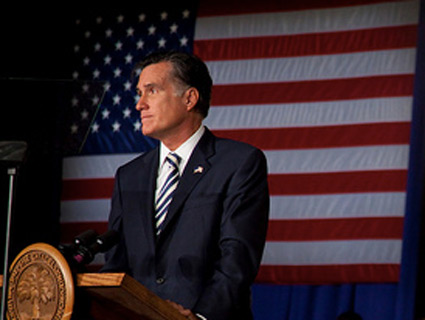 During the Fox News Republican presidential debate in Sioux City, Iowa on Thursday night, Mitt Romney was asked about the American spy drone that crashed in Iran nearly two weeks ago. The on-and-off 2012 GOP front-runner was also asked if the Obama administration’s response to the captured drone demonstrated weakness.

“Absolutely,” Romney said. He asserted that the drone incident was just one of many examples of the president handling foreign policy matters with timidity, and that Obama’s lack of “strength” was “inviting war.” With regards to the White House “asking” the Iranian regime to return the downed aircraft, Romney blasted the Obama administration for doing “nothing” and endorsing a “foreign policy based on [saying] ‘pretty please.'”

The former Massachusetts governor had told Fox News earlier this week that, by not retrieving the US drone, President Obama was acting “extraordinarily weak and timid in a critical moment” and argued that he should have ordered American forces to “destroy it or go get it.” This criticism fits perfectly with the narrative he’s been attempting to spin that Barack Obama pursues a policy of “appeasing” our foreign enemies.

Of course, Obama’s decision not to invade or bomb Iran in order to destroy the remains of a drone had absolutely nothing to do with being timid or weak; the decision was based on the recommendation of his entire national security team, plus the advice of top military and intelligence officials. According to the Wall Street Journal, officials weighed the options of “conducting a covert mission inside Iran to retrieve or destroy [the] stealth drone…but ultimately concluded such a secret operation wasn’t worth the risk of provoking a more explosive clash with Tehran”:

The officials considered various options for retrieving the wreckage of the RQ-170 drone.

Under one plan, a team would be sent to retrieve the aircraft. U.S. officials considered both sending in a team of American commandos based in Afghanistan as well as using allied agents inside Iran to hunt down the downed aircraft.

However, the officials worried that any option for retrieving or destroying the drone would have risked discovery by Iran.

“No one warmed up to the option of recovering it or destroying it because of the potential it could become a larger incident,” the U.S. official said. If an assault team entered the country to recover or destroy the drone, the official said, the U.S. “could be accused of an act of war” by the Iranian government.

In other words, the president made a foreign policy move based on prudence, not liberal wimpishness.

Furthermore, it might be worth asking Romney which of these two options he thinks would have a greater chance of “inviting war”: A) Not listening to foreign policy hawks every once in a while, or B) ordering something that could actually be construed as a violent act of war.