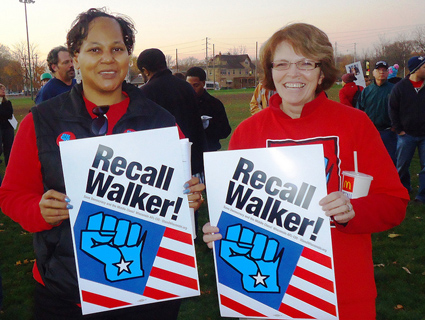 With a month to go, activists trying to recall Wisconsin Gov. Scott Walker have collected more than 507,000 signatures in just a month’s time, the Democratic Party of Wisconsin announced Thursday.

Walker foes need at least 540,208 signatures to trigger a recall election of the first-term governor. It’s now obvious they’ll easily surpass that requirement. The Democratic Party of Wisconsin, part of the coalition of groups spearheading the recall effort, say they hope to gather 720,000 signatures by the end of the two-month window. They say that’s a large enough cushion to account for legal challenges and bogus signatures thrown out by recall activists and the Wisconsin elections board, which ultimately vets the signatures.

United Wisconsin’s recall effort kicked off on November 15, with midnight parties around the state ringing in the start of the campaign. The signature-gathering leapt out of the starting gate, gathering more than 300,000 signatures in the first 12 days. By that point, activists had also bagged nearly 300,000 signatures to trigger a recall of Lt. Gov. Rebecca Kleefisch, though at the one-month mark, the number of signatures collected for a Kleefisch recall trails the Walker total. (The Government Accountability Board, the state’s main election body, said recall organizers must collect at least 540,208 signatures for both Walker and Kleefisch.) And by that point, more than 20,000 volunteers had signed up to collect signatures, said Meagan Mahaffey, a spokeswoman for United Wisconsin.

Plenty of those signatures came from residents in traditionally Democratic areas, such as Madison, the state capital, and Milwaukee, the state’s largest city. But organizers trumpeted gains in rural, more moderate parts of the state, too.

Today, more than 25,000 Wisconsinites who’ve volunteered through one of 42 field offices statewide are powering the recall effort, according to statistics provided by the state Democratic Party. The same number of Wisconsinites have donated to recall effort; the average online donation is $27. And more than 37,000 people have downloaded recall petitions off of the Democratic Party of Wisconsin’s website.

Walker’s strategy, meanwhile, involves taking full advantage a loophole in Wisconsin elections law allowing him to raise unlimited sums of money from individuals to fill his recall defense war chest. (Normally, individuals can give a maximum $10,000 to gubernatorial candidates.) As Mother Jones first reported, Brad Courtney, chairman of the Republican Party of Wisconsin, said at a private event in October that Walker and his team intend to capitalize on that loophole. “What Scott says is we’re gonna raise a lot of money—we can accept unlimited money for a 60-day time period, so you’re gonna see a lot of positive, wonderful ads about what’s going on in Wisconsin,” Courtney said.

A month in, the Walker recall fight has stirred up its share of controversy. On Facebook, a handful of conservatives openly plotted to sabotage the signature-gathering effort by destroying official petitions; their braggadocio sparked a small outcry and prompted the state election board to remind the public that tampering with official petitions was a felony offense. Last week, police charged a West Bend, Wis., man with a felony for defacing a recall petition, the Milwaukee Journal Sentinel reported. Upon realizing what he’d done, the man, Jeffery Karnitz, told police, “I kind of kicked myself in the ass.”

Also hanging over Walker is a “John Doe” investigation reportedly looking at his tenure as Milwaukee county executive from 2002 to 2010. At least 11 individuals—including Walker’s spokesman Cullen Werwie and a Milwaukee Republican operative named Rose Ann Dieck—have been granted immunity so they can speak to investigators. This week, as the Journal Sentinel reported, Milwaukee County prosecutors arrested real estate broker Andrew Jensen Jr., the John Doe probe’s first arrest, for allegedly refusing to cooperate with investigators. In September, FBI officers raided the Madison home of Cynthia Archer, a former Walker aide, seizing a box and a hard drive.