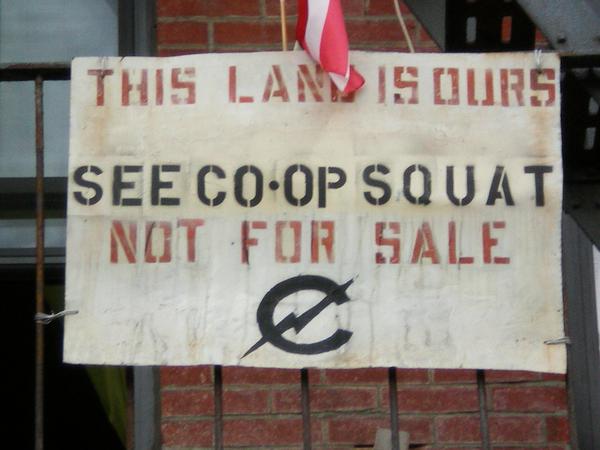 As Josh Harkinson reported today, squatters groups and housing rights activists are teaming up with Occupy movements across the country to help evicted tenants stay in their foreclosed homes.

Occupy Our Homes, as the movement is called, isn’t the first time evicted homeowners and squatters have mobilized under a political banner in this country. Here are a few examples of landmark occupations going back to the Great Depression.

Lower East Side squats
From 1989 to 1999, Giuliani spent millions attempting to oust groups squatting in eleven abandoned buildings in New York City’s East Village and Lower East Side, at one point dispatching sharpshooters and a tank to 13th street to remove squatters who had welded themselves inside four buildings. When the city was successful in clearing one building of squatters, others would come and take their place. For many squatters, the action was as much about the practical necessities of finding shelter as about sending a political message about housing inequality and rising rents in once-affordable New York neighborhoods.

In 2002, the Bloomberg administration struck a deal with the residents to sell the squats for $1 each to the Urban Homesteading Assistance Board, a nonprofit with a history of helping tenants take over buildings. UHAB helped the squats meet building codes and then sold the units back to residents as limited equity co-ops, marking a rare moment of government conciliation to housing rights activists.

Homes Not Jails
Since 1992, San Francisco-based Homes Not Jails has worked to put homeless people in vacant houses. As the Houston Chronicle reported in 1993, “homeless tenants are recruited through leaflets handed out at the various soup kitchens around the city. These leaflets invite anyone who is interested to come to a weekly Homes Not Jails meeting where the process is explained to them, they hear testimony from squatters, and they move in to a house that evening.”

Though successful takeover of the property is by no means guaranteed, the group takes part in both well-publicized and covert takeovers of vacant housing. The group says it’s opened hundreds of abandoned homes to new owners in the last 15 years, and dryly notes on its site that squats can keep going for a long time: “People from Europe squatted this country over 300 years ago, and their squats are still going.”

Take Back the Land
A longtime organizer of major foreclosure actions, Take Back the Land spearheaded the 2006 construction of a shantytown called Umoja Village on public property in the low-income Liberty City section of Miami. Run by over fifty otherwise homeless people, the encampment was both a political statement about the lack of affordable low-income housing and a functioning, consensus-based community. A mysterious fire destroyed Umoja Village six months after it was built, but Take Back the Land continues to represent a grassroots network of organizations that help local families hold on to their foreclosed properties.

Squatting and eviction defense have an even longer history in the US. In a recent segment, Rachel Maddow pointed to Depression-era marches and riots to return evicted families to their homes. And during housing crises of the early 1930s, mobs armed with kitchen utensils were reported to have rushed at police to defend foreclosed homeowners, or caused distractions while a family’s possessions were brought back inside the house.

Visit msnbc.com for breaking news, world news, and news about the economy