In Soweto, they’ve found a new use for an old coal plant: public art, and bungee jumping. 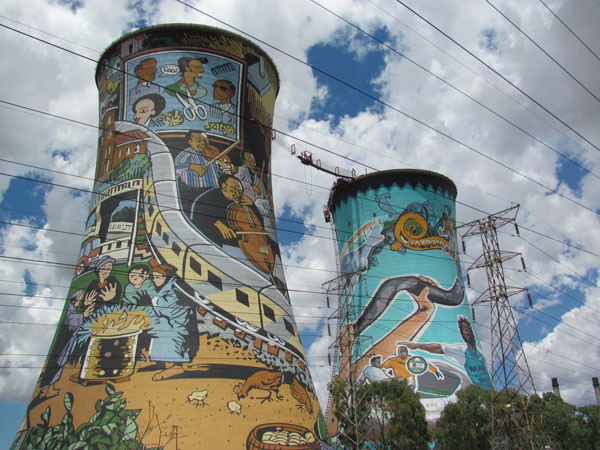 More than a million people live in Soweto, a sprawling township just outside of Johannesburg. For decades, black South Africans were relegated to this suburb, and it became a major hub in the movement to end apartheid. To this day, nearly all of the residents are black; they range from wealthy upper middle class (including the Archbishop Desmond Tutu and Winnie Mandela, the former wife of the political leader) to a squatter camp that still lacks electricity. Rising from the middle of it are the remnants of Orlando Power Station, a coal-fired power plant with two massive cooling towers.

The towers date back to the early 1950s, though the plant was built in the ’30s and used largely to provide power to the white areas of Johannesburg. The plant was shut down in 1998, but when it was in operation, some of those living in its shadow—and in the line of its pollution—lacked access to electricity. First National Bank funded the renovation project, which was finished in 2006. It is now home to the largest mural in South Africa: One stack celebrates Soweto’s eclectic heritage: Nelson Mandela, musicians, folks warming around a fire, and chickens grazing in a yard. The other tower shows a favorite pastime, soccer.

Arguably the best part: From a tiny platform strung between the two towers, you can now bungee jump. A jump from a coal plant will cost you about $35, but then of course you’re also buying bragging rights for the rest of your life. More on the power plant, and the extreme sporting opportunities, here.