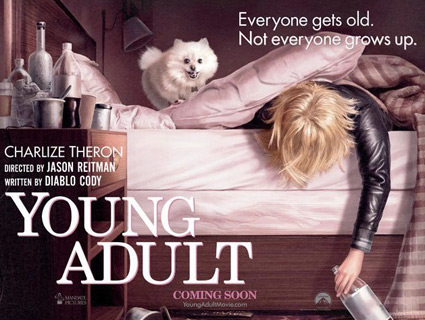 Director Jason Reitman has a knack for wringing the captivating waggishness out of scarred and broken characters. So it makes perfect sense that his latest effort would be a comedy about despondency, isolation, and acute immaturity.

Young Adult has an eye-rolling-ly familiar premise: as screenwriter Diablo Cody told Film Journal International, it’s a story about a woman who “cling[s] to deluded teenage fantasies…and is obsessed with recreating her teenage years come hell or high water.” That brings us to Mavis Gary (Charlize Theron), a slobbish teen-lit ghostwriter staring down the barrel of imminent middle-age who takes a break from big-city life to return to the small town she ditched nearly two decades prior. The sad, blonde, and comely Mavis tracks down an old flame—now a mellowed-out family man named Buddy Slade (Patrick Wilson) whom she is determined to steal for herself.

All right, so the elevator pitch for this movie isn’t much. But what could have easily come off as an unofficial remake of Sweet Home Alabama is instead a savagely funny, moving dark comedy that’s dripping with rich metaphor.

The power of the film lies primarily in the twin impact of sparse dialogue and tightly coiled acting. Theron delivers a performance that’s equal parts charming impudence, torn-and-frayed sexuality, and quiet devastation. The private life Mavis has carved out for herself is soul-sucking to the slightest detail: She spends most of her time alone and sequestered in a dark high-rise, hunched over her grungy MacBook, guzzling diet cola, and greasing the printer inkjet with her saliva.

When she arrives back in her hometown of Mercury, Minnesota, things just take a turn for the bitter.

“This is a hick lake town that smells of fish shit!” Mavis drunkenly hollers to a party of terrified onlookers. Somehow, Theron uses every grunt, every annoyed squint, and every passive-aggressive dig in her arsenal to seduce the audience into loving to hate her. Throughout the economical hour-and-a-half running time, she steers clear of reducing Mavis to caricature and actually manages to turn a seemingly unpalatable character—a stale, self-aggrandizing woman-child bitch—into a crash course on bruised humanity.

Young Adult hits its stride when Mavis starts connecting with Matt Freehauf (Patton Oswalt), a rotund and dour schoolmate the former prom queen never noticed. She stumbles on Matt working as a bookkeeper in a local tavern. He’s still living with his sister Sandra (a perversely alluring Collette Wolfe) and cooking up moonshine in his garage. Known as the “hate-crime guy” in high school, Matt has had to walk with an arm brace ever since a gang of coked-out jocks beat him with a crowbar after mistakenly thinking he was gay. 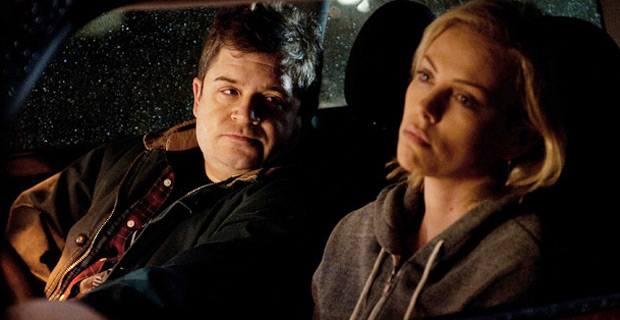 “Things aren’t so great down south,” Matt says, as he recounts the attack that caused him to “piss and cum sideways for the rest of [his] life.” Oswalt, an ace comedian who really has evolved into a fine actor (Pixar’s Ratatouille and 2009’s Big Fan), turns in his best performance yet, nakedly displaying the pain (and raw humor) that comes when a good person has been pummeled by years of lousy luck. But the real pleasure is when it becomes abundantly clear just how much Mavis—in unexpectedly and subtle ways—sees herself in Matt, and vice versa. The connection forged between the nerd and the knock-out is both heartbreaking and thoroughly convincing.

Director Reitman, who’s racked up big-time indie cred alongside solid box-office returns with movies like Juno (2007) and Up in the Air (2009), makes his new film at once a meditation on regret and drained youth and a character study laced with a droll, blistering wit. The closing act runs the substantial risk of alienating viewers, given that the ending offers barely a semblance of closure or lessons learned. But anyone who makes it to the final credits expecting a Say Anything-type finale completely misses the point. Young Adult relies heavily on the same powerful theme that runs through Up in the Air—the harsh realization that you simply can’t fast-track your way to happiness.

With tender moments that are perfectly timed and an unsparing plot twist you won’t see coming, this comedy packs one hell of an emotional body-slam.

Click here to get showtimes and tickets for Young Adult, which gets a wide release on Friday, December 16.