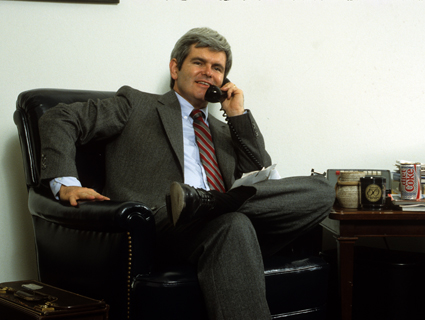 Gingrich took his great leap forward in Washington politics as a young congressman by launching a string of ethics charges against House Speaker Jim Wright, which ultimately brought the Texas Democrat down. But that didn’t make Gingrich any sort of ethics crusader—far from it. When asked by MoJo in 1989 whether he’d support legislation to crack down on the amount of money elected officials can earn on the speaking circuit, Gingrich didn’t just reject the idea, he scoffed at the very notion that money can buy influence:

[D]on’t look to Newt Gingrich as a shining example of even his own proposed reforms. Not only did he receive $265,697 in PAC money for his 1988 re-election campaign, he’s one of Congress’s highest spenders on junk mail. Naturally, he also pocketed close to the limit, $26,800 of $26,850, allowed per year in honoraria. “The idea that a congressman would be tainted by accepting money from private industry or private sources is essentially a socialist argument,” explains Gingrich.

And he doesn’t just throw that term around lightly.

Gingrich has taken the same line of attack in his run for president. Asked by USA Today in November to respond to criticism over his seven-figure paycheck from Freddie Mac, he dismissed his critics as “people with a socialist bias that you shouldn’t earn money.” Take that, George Will.