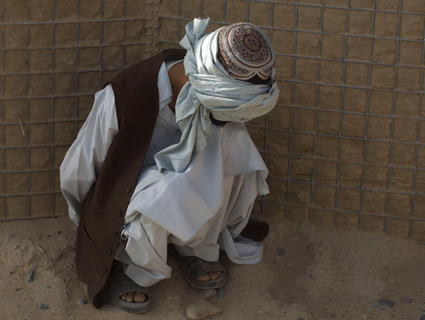 One of the stranger ironies of the controversial defense bill signed recently by President Obama is that, while it eroded the rights of Americans at home, it may have augmented those of detainees in Afghanistan.

As it stands, detainees in Afghanistan are essentially in limbo. Thanks to a 2008 Supreme Court ruling, Guantanamo detainees have habeas corpus rights and can challenge their detention in federal court. But individuals held by American forces in Afghanistan face military panels where they rarely get to see, let alone challenge, the evidence against them.

“It’s Brechtian,” says Daphne Eviatar, a senior associate with Human Rights First’s Law and Security Program, who observed detainee review board proceedings in Afghanistan last February. “The government says, ‘Trust us, we have evidence against you, but we’re not going to tell you what it is.'”

That could all change. A little-noticed provision in the National Defense Authorization Act mandates that the administration provide suspected terrorist detainees being held in “long-term” military detention with the option of being represented by military attorneys while their status is evaluated by a military judge. The legislation would offer far more due process to detainees who, until now, haven’t had any meaningful opportunities to challenge their detention. According to some legal experts, the measure would be an unprecedented extension of due process rights to detainees who are still being held in a war zone. Ironic, considering that elsewhere in the legislation it further militarizes domestic counterterrorism and hands the president the power to hold certain individuals suspected of terrorism without charge or trial.

“If this had been passed by a Democratic Congress over the veto of the Bush administration, people would be going crazy,” says Robert Chesney, a national security law expert who teaches at the University of Texas School of Law. Perhaps an even greater irony is that the architects of the provisions included Sens. Lindsey Graham (R-S.C.) and John McCain (R-Ariz.), both of whom pushed hard for a version of the bill that authorized the military detention of American terrorism suspects apprehended on US soil.

“I want to be able to tell anybody who is interested that no person in an American prison—civilian or military—held as a suspected member of Al Qaeda will be held without independent judicial review,” Graham said during debate on the Senate floor in December. Human rights advocates have long sought greater due process rights for detainees in Afghanistan. Because Taliban fighters don’t wear uniforms, it can be more difficult to tell whether the individual in question has been justly detained. A federal judge ruled in 2009 that certain detainees at Afghanistan’s Bagram detention facility had habeas rights, only to be overturned by a higher court that said detainees in a war zone aren’t entitled to the same rights as detainees at Gitmo.

The new process, per the guidance from Congress, makes clear that the enhanced process would come into play only after the detainee’s first review takes place after six months in detention, and perhaps even later than that. Yet that would still be a significant change from the current detainee review process, where long-term detainees face a military panel rather than a judge and is not represented by a lawyer.

Still, the Obama administration—which came into office promising a new trajectory on human rights and national security from his predecessor—doesn’t seem too happy about it. In his signing statement, the president said the provisions “needlessly interfere” with the administration’s process for determining whether or not a detainee is actually a member of an enemy force. Yet the provision actually includes a significant bit of wiggle room, granting the Secretary of Defense the authority to define what “long-term detention” means. Since the United States is technically supposed to pull out of Afghanistan in 2014, the administration could decide that few, if any, detainees qualify as long-term detainees. That’s why Obama’s signing statement, in which he insists on the defense secretary’s “broad discretion” to decide who qualifies for the new process, has human rights advocates worried.

“From the signing statement, it sounds like they might not provide for the hearings that Congress has mandated,” Eviatar says.

Sen. Carl Levin (D-Mich.), the chair of the Senate Armed Services Committee, has the administration’s back. “The president’s stated intention to use the flexibility Congress has given him is consistent with the statute,” Levin told Mother Jones in a statement.

A senior national security official said that the signing statement was crafted to reflect legal and logistical concerns. “We want to ensure that we are not detaining innocent people, without taking on an obligation that we simply don’t have the resources to provide,” the official said. “We’re just trying to indicate that we plan to use our discretion to determine when it’s appropriate—given resource, security, and human rights considerations—to afford this process to detainees.”

A lot is riding on how exactly the administration decides to interpret the provisions. But the standard set here has tremendous implications for how the United States and even other countries conduct detainee affairs during wartime. For some detainees in Afghanistan held for years without charge or trial, it could mean freedom.