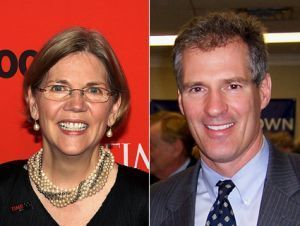 On Monday morning, Sen. Scott Brown (R-Mass.) and his likely Democratic opponent, Harvard Law School professor Elizabeth Warren, agreed to a pledge banning third-party advertisements in the run-up to November’s election. Groups like the League of Conservation Voters and Rethink PAC (attacking Brown) and Crossroads GPS (attacking Warren) had been waging a proxy war on the airwaves in Massachusetts since last fall, and with the inclusion of third-party ads, the race was expected to wind up in the $100 million range. Last week, Warren and Brown began hashing out a dark-money pledge (while hammering each other on the disagreements in public), and now, the Globe‘s Glen Johnson reports, they’ve reached a compromise.

The pledge for both candidates to denounce third-party ads run by supporters, ask TV stations not to air them (which TV stations don’t have to do), and—if the problem persists—Brown proposed that the candidate who benefits from the ads donate 50-percent of the total cost of the ad buy to charity (501(c)(3) political groups, presumably, don’t count).

Both sides obviously think they have something to gain from the agreement; Anti-Brown third-party groups have outspent the other side by a 3 to 1 margin so far, so you could see why he might want Warren’s outside groups to call off the dogs. Warren, likewise, is sick of being tarred—simultaneously—as a Wall Street shill and a radical occupier, and has to think that, this being deep-blue Massachusetts, she can win the race on her own if she runs close to a competent campaign. Besides, she raised $5.7 million in the last three months; money’s no issue.

Both campaigns are declaring victory, but will it really make a difference? In a statement, LCV Senior Vice President of Campaigns Navin Nayak said: “While we cannot take directions from any candidate on our independent activities, we are inclined to respect the People’s Pledge agreed to by Elizabeth Warren and Scott Brown and we hope that Scott Brown will honor his end of the deal when Crossroads and the Koch Brothers inevitably break it.”

Meanwhile, here’s the statement American Crossroads president Steven Law just blasted out on the agreement: “Because the agreement allows union phone banks, direct mail, and get-out-the-vote drives—all union core specialties—Warren’s latest agreement has loopholes the Teamsters could drive a truck through, the longshoremen could steer a ship through, the machinists could fly a plan through, and government unions could drive forklifts of paperwork through.”