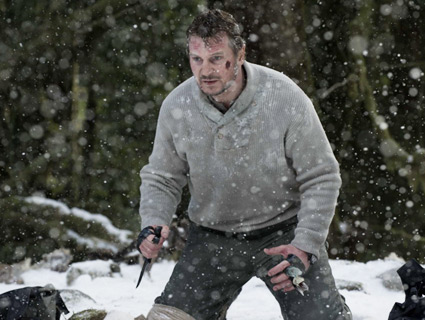 There’s no easier way to get a movie made in Hollywood than to walk into a room full of studio executives and say these 16 magic words: “Two straight hours of Liam Neeson fighting wild animals to the death with his bare hands.”

And if you’ve seen any of the trailers for The Grey, chances are good that’s exactly what you thought the movie was going to be about. The plot is refreshingly without frills: Neeson stars as Ottway, a brooding, poetry-quoting middle-aged man who works on an Alaskan oil rig. His profession? Killing wolves with his rifle all day—something he describes as a “job at the end of the world.” One day, a plane he’s riding on crashes into a pitiless Alaskan snowscape. Ottway and six other survivors are stranded and terrified, with only a handful of useful supplies. And you can bet all the money in your pockets that the local wolves—very pissed-off wolves—have zero intention of leaving them be.

Understandably, animal rights advocates aren’t too thrilled about this movie. Even though writer/director Joe Carnahan has repeatedly claimed that the film has an environmental message at its core, some animal rights and conservation groups are pushing for a boycott of the film.

“Carnahan’s irrational fear [of wolves] will further drive the 21st-century extermination campaign on wolves,” Wendy Keefover, carnivore protection director for WildEarth Guardians, told Mother Jones. “In the last few months alone, hundreds have been slaughtered in Idaho and Montana because of displaced fears by fanatics, who wrongly believe that wolves compete with or pose a threat to them…Just watching the trailer is too anxiety-producing for me. It’s so brutally wrongheaded.”

Yes, in real life, wolf-on-human violence in North America is rare, and fatalities even more so. (It’s important to keep in mind that everything you ever learned from the movies about allegedly blood-lusty animals is dead wrong.)

This is not, however, a good reason to declare the film a blood libel against wolves everywhere. After all, wanting to bask in the rejuvenating glow of watching the guy who killed and tortured degenerate foreigners in Taken battle a marauding gang of wolves isn’t an endorsement of wolf-hate any more than the first five minutes of The Matrix is an endorsement of cop-killing.

But here’s the thing about The Grey: There is so much more to this movie than rambunctious subzero wolf-punching. In spite of what the marketing campaign chose to reveal to you, most of the movie has nothing to do with the unapologetically cool Neeson going to town on some wolves. The film, based on a short story by screenwriter Ian MacKenzie Jeffers, makes liberal use of flashbacks and tundra symbolism to craft a vivid portrait of existential exhaustion, all of it framed by Masanobu Takayanagi‘s haunting photography.

Joe Carnahan—a seasoned practitioner of kinetic filmmaking whose past credits include The A-Team, the wickedly fun Smokin’ Aces, and the terrific Narc—directs with a characteristically steady hand, straddling the thick line between action-flick accessibility and taut art house cinema.

Liam Neeson continues to stake out his reputation as Hollywood’s elder statesman of class-A ass-whupping.

There are large chunks of running time where the stranded men simply sit and talk about their families and their regrets. The cast—offering up effective, raw performances from Frank Grillo, Dermot Mulroney, and Dallas Roberts—emphasizes emotional and personal vulnerability over machismo. (The film’s bare-knuckled humanity has even earned comparisons to the works of Jack London!)

Now, lest you start thinking that The Grey is just Sisterhood of the Traveling Pants transposed to the frostbitten wilderness, let’s be clear about something: There is enough riveting action, brutal violence, and dark comic relief to satisfy moviegoers who are just looking for brainless entertainment. A guy who goes out for a midnight leak gets instantly disemboweled by the dogs. A beautifully staged set piece involving the last survivors jumping off a cliff, over a deep gorge, into a thick of gigantic trees is alone worth the cost of admission. When an omega wolf tries to ambush one of the men, he responds by knifing the animal roughly eight dozen times, decapitating the corpse, hurling the head in the direction of the pack, and bellowing, “You fuck with us, we fuck with you!”

Most importantly, there is absolutely no shortage of Liam Neeson being Liam Neeson. Working off his mid-career/mid-life reinvention as a top-billed action star, Neeson continues to stake out his reputation as Hollywood’s elder statesman of class-A ass-whupping. At one point, Ottway dives into a gelid river to rescue a distressed comrade like it ain’t no thing. In his trademark rasp, he politely informs a fellow oil rig worker that “I’m gonna start beating the shit out of you in about five seconds, and you’re gonna be swallowing a lot of blood.” When the huddled survivors are approached by a band of man-eating wolves, Ottway reassures his fellow humans with a persuasive “Be cool.”

Later on, he even takes a breather to look up at a pale blue sky and rail against God for being such a “fuckface.”

Beyond the one-liners, Neeson’s commitment to the demanding, rugged role readily shines through. (The man subjected himself to freezing showers for 10 minutes every morning during the shoot, which should give you an idea of how utterly worthless and frail you are when compared to Liam Neeson.)

The Grey is weighed down slightly by the kind of abrupt ending that leaves you wondering if the test screening devolved into an all-out riot. But long after the credits roll, the movie will have you recalling its subtleties and savoring its visceral kick.

The Grey gets a wide release on Friday January 27. Click here for local showtimes and tickets.