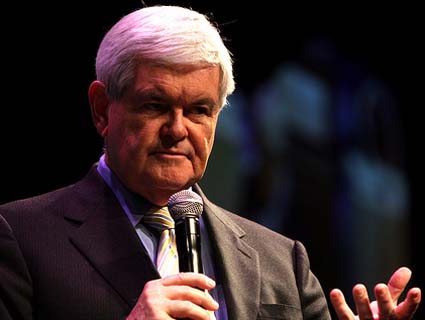 Newt Gingrich has a grandiose idea. <a target="_blank" href="http://www.flickr.com/photos/gageskidmore/6265575755/">Flickr/Gage Skidmore</a>

During his interview with Univision’s Jorge Ramos this morning, Newt Gingrich was asked just how far he was willing to go in order to eliminate the Castro regime in Cuba. Gingrich said that he thought it was “baloney” that Obama intervened in Libya (a decision Gingrich was on both sides of on multiple occasions) but apparently hadn’t thought of bombing Cuba. Gingrich said this contrast was “fascinating,” and wondered why Obama “doesn’t quite notice Cuba.”

“The US bombed Qaddafi, are you prepared to the same thing with the Castros?” Ramos asked. Gingrich equivocated, suggesting he’d be open to the idea if there were a popular uprising like the ones in the Middle East and North Africa, but then seemingly attacking Obama for not having done so:

Well I think at the moment you don’t need to…in that case you had an uprising. I would say bluntly, because I find it fascinating that Obama is intrigued with Tunisia, Libya, Egypt, Syria, but doesn’t quite notice Cuba. I would just argue if there was a genuine, legitimate uprising we would of course be on the side of the people. And we should be prepared to be on the side of the people. But in that sense, I don’t see why Cuba should be sacrosanct, and we should say, don’t do anything to hurt…we’re very prepared to back people in Libya, we may end backing people in Syria, but now Cuba, hands off Cuba, that’s baloney. The people of Cuba deserve freedom.