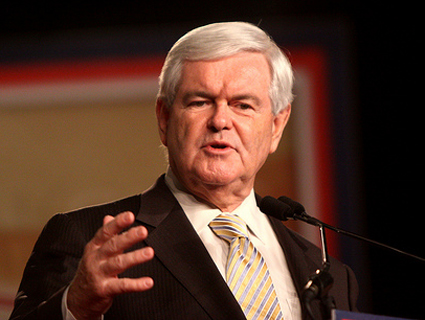 Newt Gingrich slammed Mitt Romney’s proposal for “self-deportation” as an “Obama-level fantasy” an interview with Univision’s Jorge Ramos Wednesday morning. If the polls are right, more than a tenth of the GOP electorate in Tuesday’s Florida primary will be of Hispanic origin.

“I think you have to live in a fantasy of Swiss bank accounts and Cayman Island accounts to have an idea this far from reality,” Gingrich said alluding to recent revelations from Romney’s recently released tax returns. “For Romney to believe that someone’s grandmother to be so cut off, that she’s going to self-deport? This is an Obama-level fantasy…[Romney] has no concern for the humanity of people already here.” According to the Pew Hispanic Center, more than two thirds of the nearly 11 million unauthorized immigrants in the US have been here ten years or more, and nine million people are part of “mixed status” families where one or more family members is undocumented.

The concept behind “self-deportation,” already at work in states like Arizona and Alabama, is that state governments can make life so miserable for unauthorized immigrants that they opt to leave the country. As explained by immigration restrictionist Mark Krikorian of the Center for Immigration Studies in 2005, this is done by turning  every minute transaction with the government into an opportunity to ascertain legal status, such as “getting a driver’s license, registering an automobile, opening a bank account, applying for a car loan or a mortgage, getting a business or occupational license, and obtaining government services of any kind.”

There was one rather moving moment where Gingrich was asked whether he’d support making it so that citizen children of undocumented immigrants would be able to get in-state tuition at state colleges despite their parents’ status. Gingrich’s answer suggested he was unaware of the problem, but he said that he would “strongly support the idea that students’ free-standing status as American citizens should allow them to get in-state tuition.”

Gingrich’s relatively moderate approach to immigration when compared to Romney hasn’t moved the needle much in his direction as far as Latino Republicans in Florida are concerned. Latinos still back Romney over Gingrich 35 percent to 20 percent, although 21 percent are undecided, according to ABC News’ Matthew Jaffe. Romney’s appearance on Univision this afternoon could have a significant impact on how that 21 percent ultimately breaks. Gingrich also said he’d like to win the majority of the Latino vote in a hypothetical contest with Obama, but that’s unlikely—the same poll shows him getting 22 percent, while Obama would get seventy percent.

Gingrich has his share of baggage to contend with, too. Years ago Gingrich said Spanish was “the language of living in a ghetto.” Confronted by Ramos, Gingrich seemed to deny it, before offering the sort of glorious walkback he’s become known for.

“Spanish is a language of enormous cultural power,” Gingrich said.