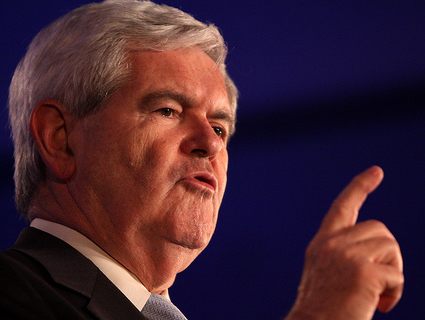 During Monday night’s debate, Fox News debate moderator Juan Williams tried unsuccuessfully to get Newt Gingrich to justify his comment that black Americans should “demand paychecks and not be satisfied with food stamps.” Instead of explaining himself, as my colleague Asawin Suebsaeng wrote, Gingrich just argued that liberals hate it when people earn money.

WILLIAMS: Speaker Gingrich, you recently said black Americans should demand jobs, not food stamps. You also said poor kids lack a strong work ethic and proposed having them work as janitors in their schools. Can’t you see that this is viewed, at a minimum, as insulting to all Americans, but particularly to black Americans?

GINGRICH: No. I don’t see that.

You know, my daughter, Jackie, who’s sitting back there, Jackie Cushman, reminded me that her first job was at First Baptist Church in Carrollton, Georgia, doing janitorial work at 13. And she liked earning the money. She liked learning that if you worked, you got paid. She liked being in charge of her own money, and she thought it was a good start.

I had a young man in New Hampshire who walked up to me. I’ve written two newsletters now about this topic. I’ve had over 50 people write me about the jobs they got at 11, 12, 13 years of age. Ran into a young man who started a doughnut company at 11. He’s now 16. He has several restaurants that take his doughnuts. His father is thrilled that he’s 16 because he can now deliver his own doughnuts.

What I tried to say — and I think it’s fascinating, because Joe Klein reminded me that this started with an article he wrote 20 years ago. New York City pays their janitors an absurd amount of money because of the union. You could take one janitor and hire 30-some kids to work in the school for the price of one janitor, and those 30 kids would be a lot less likely to drop out. They would actually have money in their pocket. They’d learn to show up for work. They could do light janitorial duty. They could work in the cafeteria. They could work in the front office. They could work in the library. They’d be getting money, which is a good thing if you’re poor. Only the elites despise earning money.

Gingrich didn’t actually address the question Williams asked, which was how he justifies implying that black people would rather sit at home living on food stamps than earn money for a living, and that those traits are so ingrained that it would justify Gingrich lecturing black people collectively (in the form of a speech to the NAACP) about the virtues of working for a living. Gingrich was asked why he assumed black people were both poor and lazy (and poor because they are lazy), and he responded by shredding a strawman about how liberals don’t want people to work. In all honesty, that was probably better than trying to justify his original remarks. Gingrich is actually making the argument that excessive government stops hardworking poor people from making money, which is different from arguing that poor people don’t know how to work hard.

Gingrich has also been slippery about saying “food stamps,” denying or embracing the racial implications when convenient. Last October, he told NBC host David Gregory on Meet The Press it would be “bizarre” to read any racial implications in Gingrich referring to Obama as the “food stamp president.” Then, two weeks ago, Gingrich magnanimously offered to tell black people as a whole, through a speech to the NAACP, that “I’ll go to their convention and talk about why the African American community should demand paychecks and not be satisfied with food stamps.” Shorter Gingrich: It’s bizarre to associate food stamps with black people, who really need a stern lecture from me about their preference for food stamps rather than work.

Historically speaking, there’s nothing particularly unusual about Republicans attempting to undermine support for the social safety net by telling white audiences that their hard-earned money is being robbed by the federal government to subsidize the underserving black masses. Ronald Reagan, after all, used to tell audiences tales of “strapping young bucks” using food stamps to buy “t-bone steaks.” By portraying people on food stamps as faceless leeches, one can avoid the fact that most people on food stamps are white, and that hardworking people of modest means can be shoved into poverty by economic conditions beyond their immediate control. What’s new, and indicative of this unique moment in contemporary American politics, is that the man in the White House looks like the kind of people Republicans have typically used to condemn the welfare state.