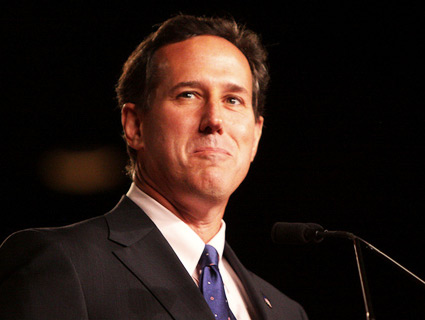 Like any good presidential candidate, Rick Santorum heaps praise on America’s soldiers and veterans. He’s pledged to “make veterans a high priority” if elected president, adding, “This is not a Republican issue, this is not a Democratic issue, it is an American issue.” But as a US senator, Santorum engineered a controversial land deal that robbed the military’s top veterans’ home of tens of millions of dollars and worsened the deteriorating conditions at the facility.

The Armed Forces Retirement Home, which is run by the Department of Defense, bills itself as the “premier home for military retirees and veterans.” The facility sprawls across 272 acres high on a hill in northern Washington, DC, near the Petworth neighborhood. The nearly 600 veterans who now live there enjoy panoramic views of the city—the Washington monument and US Capitol to the south, the Shrine of the Immaculate Conception to the east. At its peak, more than 2,000 veterans of World Wars I and II, the Korean War, and the Vietnam War lived at the Home.

But with the rise of the smaller all-volunteer military, the Home began to run into serious financial problems. It was clear that one of its primary sources of revenue—a 50-cent deduction from the paychecks of active-duty servicemembers—wasn’t enough to keep the Home operating fully. In the 1990s, the Home scrambled to find ways to avoid insolvency, trimming its staff by 24 percent and reducing its vet population by 800. Still, the money problems began to show, with its older historic facilities slipping into disrepair and decay. To grapple with its worsening shortfall, officials running the Home eyed a valuable, 49-acre piece of land worth $49 million as a potential financial lifeline.

Under one scenario, by leasing the parcel of land and letting it be developed, the Home could pocket $105 million in income over 35 years for its trust fund, David Lacy, then-chairman of the Home’s board of directors, told Congress in 1999. Lacy stressed that the Home wanted to keep the property, and not offload it to a buyer. “Once land is sold,” he said, “it is lost forever as an asset.”

Enter Sen. Rick Santorum (R-Penn.). At the behest of the Roman Catholic Church, and unbeknownst to the Home, Santorum slipped an amendment into the 1999 National Defense Authorization Act handcuffing how the home could cash in on those 49 acres. The amendment forced the Home to sell—and not lease—the land to its next-door neighbor, the Catholic University of America. Ultimately, the Catholic Church bought 46 acres of the tract for $22 million. The Home lost the land for good, and by its own estimates, pocketed $27 million less than the land’s value and $83 million less than what it could’ve made under the lease plan. Santorum’s amendment sparked an outcry from veterans’ groups and fellow US senators, who barraged his office with complaints.

Laurence Branch, then the executive director of the Home’s board, says Santorum’s amendment was “a travesty” and the Church’s lobbying for the land a case of “coveting thy neighborhood’s goods.” To this day, Branch says he blames Santorum for the Home not receiving more money for the 49-acre parcel of land. “I’m convinced Sen. Santorum is no friend of veterans,” Branch says. (A spokesman for Catholic University did not respond to a request for comment.)

At the time, Santorum said the amendment was the product of “a consensus agreement” and “was certainly not an attempt to shortchange the veterans.” (A spokesman for the Santorum campaign did not respond to multiple requests for comment.)

Santorum’s advocacy for Catholic University isn’t at all surprising. A practicing Catholic, Santorum embodies the church’s anti-abortion and anti-gay-marriage positions as well as its support for charities and alleviating poverty. While in Congress, he was a fierce advocate for the Catholic Church. A former Santorum aide told New York Times Magazine in 2005 that the senator was “a Catholic missionary who happens to be in the Senate.” That same year, Time magazine named him one of America’s ”25 Most Influential Evangelicals.”

Meanwhile, the $22 million from the land sale hardly stanched the flow of red ink at Armed Forces Retirement Home. Financial records, court documents, and government reports from the 2000s show how the Home cut back on the services it provided veterans as it grappled with funding problems. The slashing of services got so bad that in 2003 veterans living at the Home filed a class-action suit against the Home and its director, Timothy Cox, alleging shoddy health care and less access to that care. As a result of cutbacks and declining quality in care, the suit claimed, the suicide rate at the Home spiked from 59 in 2000 to 131 in 2003.

In 2007, an investigation by the Government Accountability Office came to similarly troubling conclusions. The watchdog’s head, David Walker, reported that one Home resident had been admitted to the hospital with maggots in a wound. Other vets were admitted with bad pressure sores, suggesting they’d been left unattended for dangerously long stretches of time by the Home’s health care employees. In the aftermath of the GAO’s investigation, Sens. Carl Levin (D-Mich.) and John McCain (R-Ariz.) demanded an independent investigation into the quality of health care at the Home.

Yet today, despite some improvement in the Home’s financial health, its campus is pocked with boarded-up, decrepit buildings. All but one of the Home’s gatehouses is shuttered, as are some of the Home’s more elegant buildings, including the historic Grant building (named after the Civil War general) and the red-brick hospital that now sits empty, bearing a sign warning off trespassers. Some veterans believe the Home’s constant financial struggles have led to a slow-motion decline of the Home. As longtime resident and Navy vet Robert Devaney says, “I like to call it demolition by neglect.”