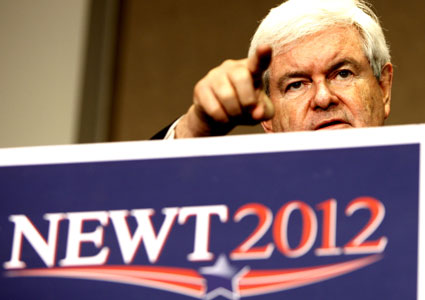 Newt Gingrich completed one of the more dramatic turnarounds in modern GOP history on Saturday, erasing a double-digit deficit in the final week of the campaign to trounce Mitt Romney in the South Carolina Republican primary by 14 points. The major networks called the race immediately after polls closed at 7 p.m. By the time Gingrich finally made his appearance at a Columbia victory party two hours and countless Jock Jams tracks later, his supporters had been whooped into a frenzy. Gingrich was happy to egg the crowd on, promising supporters he’d run an “American campaign” to save America from a “Saul Alinsky radicalist.”

“In the two debates that we had here, in Myrtle Beach and in Charleston, where people reacted so strongly to the news media, I think there was something very fundamental that I wish the powers that be in the news media would take seriously,” Gingrich said. “The American people feel that they have…elites who have been trying for a half a century to force us to quit being American and become some other system. And people completely misunderstand what’s going on: It’s not that I had a good debate; it is that I articulate the deepest-felt values in the American people.”

Saturday’s result brings to an end a terrible week for Romney, who in just a few days has gone from looking like he’d be the first candidate ever to win the first three Republican nominating contests to having a 1-for-3 record. (Romney was originally thought to have won Iowa, but a more complete count eventually gave former Pennsylvania Sen. Rick Santorum the victory.) Now the race is headed into a state—Florida—that Gingrich has always considered a firewall. Pundits can quibble over the larger significance, but one thing’s very clear: Gingrich won the South Carolina race in the last week. And he did it by effectively exploiting the medium that he promises (over and over and over and over) will carry him to victory in November—the debates. According to the Associated Press’ exit poll, two thirds of South Carolina voters said they made up their minds after last week’s two debates. Of that cohort, 50 percent went for Gingrich.

“He killed it in the debates; he knocked it into orbit on Monday,” said Mackie Christenson, who flew down from Leesburg, Virginia, to volunteer for the campaign. And now that she’s on board, she’s seeing the campaign in a new light: “To me it’s like Winston Churchill. They threw out Winston Churchill then they had a war they had to bring him back in. He’s like a bull in a china shop. Sometimes you gotta break some cups and plates to make a difference.”

Bill and Linda Norwood of Columbia speak in unison when I ask them who they voted for outside their polling place—”Newt”—and again when I ask when they made up their minds—”the debates.” Another last-minute development also influenced their vote. “I don’t like taxes,” Bill said. “I don’t like people who got all that money and won’t tell you about it. I don’t like that [Romney is] payin’ 15 percent and I’m payin’ 28. It doesn’t make sense to me, so it was just a bunch of things.” Gingrich, on the other hand, is a man who, “sometimes says things he shouldn’t” but “doesn’t need notes and stuff like that.”

The debate bump had two parts. One was reactionary—voters felt that Gingrich had put Fox News’ Juan Williams in his place for suggesting that Gingrich might have been racially insensitive when he called President Obama a “food stamp president.” As one voter told me, “When I hear the Juans of the world, I get upset.” The second is more, to use a word Gingrich is fast making his own, grandiose. For the last week, in hunting lodges and barbecue huts and even a decommissioned aircraft carrier, Gingrich hammered home a pledge he’s been making for months: If he’s the nominee, he’ll challenge Obama to a series of Lincoln-Douglas debates across the country.

It’s a perfect proposition: If Obama accepts, Gingrich will wipe the floor with him; if he declines, he’ll make the White House schedule his own and show up wherever the president campaigns to deliver a rebuttal four hours later. Noting that Obama recently traveled to Orlando to hold a town hall meeting—”I can’t wait to see the picture of President Obama standing between Mickey Mouse and Goofy”—Gingrich told an audience in Walterboro on Thursday that he was getting ready to book his own ticket to Disney World. Romney banked his campaign on the idea that Republicans, more than anything, want a candidate who can beat Obama. He just didn’t expect them to want to be able to watch it on TV, too.

Gingrich also benefited from Romney’s failings—and those of his supporters. Burch Antley of Columbia made up his mind to vote for Gingrich “when Gov. Nikki Haley supported Mitt Romney.” That’s consistent with a Monmouth poll released last week that noted that 21 percent of South Carolinians said the endorsement of their state’s Republican governor made them “less likely” to support Romney.

Now it’s on to Florida, a state Gingrich has cultivated for months, but where he’s still trailing by double digits according to the most recent polls and where it’s expensive to campaign and advertise. (Romney starts off with a large organizational advantage there; even before the Gingrich surge in South Carolina, his campaign strategists were looking to Florida as the all-important showdown.) A repeat of Gingrich’s South Carolina triumph will be complicated by the fact that due to early voting, Floridians have been casting absentee ballots for three weeks. In his victory speech on Saturday night, Gingrich acknowledged steep odds: “Anyone here, who knows anyone in Florida, please contact them at some point tomorrow.” If it’s any consolation for Gingrich, though, there’s this: The next debate is on Monday.