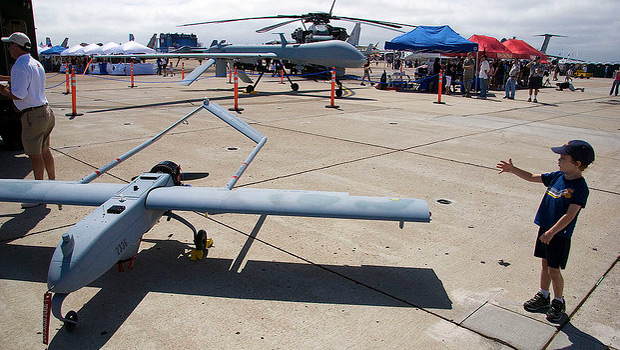 Kevin Baird/FlickrOn Thursday, the Pentagon’s top leaders are expected to release new details on how they’ll scale back military programs to meet President Obama’s goal of $487 billion in defense cuts over the next decade. But Republicans in the House and Senate are already plotting how to blunt the impact of the proposed cuts.

At a briefing Thursday afternoon, Defense Secretary Leon Panetta and Joint Chiefs Chairman Gen. Martin Dempsey will announce they’re slashing Army troop levels by 80,000 soldiers, or 14 percent of the force, while expanding bases for drones and increasing spending on the types of special forces that killed Osama bin Laden and rescued an American hostage in Somalia this week, according to the Wall Street Journal. “The administration has done a very good job of drafting a budget that meets our strategic needs. The budget reflects a sound understanding of the threats we face, and matches the resources to meet those threats,” Adam Smith (D-Wash.), the ranking Democrat on the House Armed Services Committee, told Politico after being briefed on the defense plan.

Obama’s budget proposal is a mixed bag for progressives—along with drones, notable boondoggles like the trillion-dollar F-35 fighter jet fared well, and war funding isn’t addressed. As Lawrence Korb, a former DOD official and defense analyst for the Center for American Progress, pointed out Thursday, the Obama plan effectively reduces military spending by 8 percent; in his second term, Ronald Reagan managed to cut it by 10 percent.

Still, it’s Capitol Hill conservatives who are hopping mad over the cuts, despite agreeing to them in principle during last year’s debt crisis, when they approved a “sequestration” bill to trigger automatic federal spending reductions. Rep. Buck McKeon (R-Calif.), the chairman of the House Armed Services Committee and a longtime defender of military pork, told Politico he was concerned how quickly the military could ramp up troops and programs if another war broke out. “How do they reverse the shelving of ships and aircraft that we just don’t buy?” he asked. “When we cut 100,000 troops out of the Army and Marine Corps, how do you get the experience back overnight?” That threat of war, he added, was far more imminent than President Obama acknowledged: “It’s like we live in a peaceful world in his mind.”

Republicans in both houses of Congress are already planning an offensive against the Obama military budget. McKeon has introduced a House bill that would push sequestration back a year and save cash in the meantime by barring federal agencies from replacing workers who leave their jobs. Sen. John McCain (R-Ariz.), who’s currently on the Florida primary campaign trail stumping for Mitt Romney, told Foreign Policy Wednesday that he, too, would soon unveil a plan to avoid the trigger cuts to defense.

But although Republicans agree they hate the defense cuts, they disagree on how to fight them. McCain said McKeon’s bill was “not good,” and the GOP House leadership has yet to get behind any of the plans. Conservatives have told the American public that cost-cutting is key, and they’re battling a president whose State of the Union address reminded a war-fatigued populace that the Iraq war is over and the war in Afghanistan is  winding down. For once, it might be possible that Republicans don’t have the stomach for a fight over military spending.