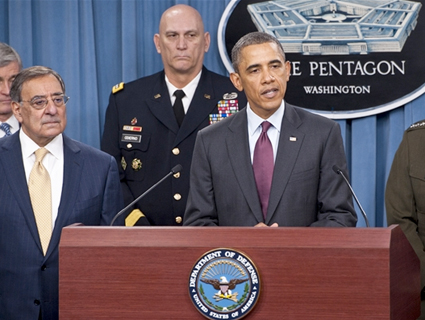 In an announcement long on ambition and short on specifics, President Obama and Defense Secretary Leon Panetta rolled out a new national security strategy Thursday that aims to drastically downsize the military. “[W]e have the opportunity and the responsibility to look ahead to the force we need for the future,” the president said. His plan, “Sustaining US Global Leadership,” aims to slash troops, fighter jets, and $450 million from the Pentagon bureaucracy. “Whenever possible, we will develop innovative, low-cost, and small-footprint approaches to achieve our security objectives,” the 16-page plan states.

If the strategy takes hold—and that’s hardly a given, considering how heavily the defense industry lobbies Congress—progressives may like a lot of what they see in the military’s newer, leaner look. Still, the plan leaves open the possibility that drones, contractors, and reservists will take over any gaps left in the mammoth, post-9/11 national security complex.

The strategy continues to focus on some perennial areas, like combating Al Qaeda, tracking WMDs, and maintaining a big presence in the Middle East (i.e. around Iran). But its updates would be significant:

While the Pentagon presentation didn’t offer specifics on what cuts might come, the New York Times reported that the Army will lose nearly 100,000 troops, and the Air Force’s aircraft fleet will be reduced significantly—including delays on future orders of the F-35 fighter jet, one of the most expensive programs in US military history.

But the new strategy could also augur boom times ahead for contractors, spies, and drones: “In adjusting our strategy and attendant force size, the Department will make every effort to maintain an adequate industrial base and our investment in science and technology,” the plan states. “We will also encourage innovation in concepts of operation.” Such science could include unmanned aerial surveillance, which has been a favorite tool of the Obama administration; such innovations could include the expansion of contractor-managed military logistics overseas, a trend that started in the ’90s and was a hallmark of the wars in Iraq and Afghanistan.

Then there’s the issue of reserve and National Guard soldiers. Since 9/11, many of these part-time servicemembers were used overseas to take the strain off America’s overstretched active-duty troops in what came to be known as the “back-door draft.” Despite the pain this imposed on weekend warriors and their families, the National Guard brass were rewarded recently with a seat on the Joint Chiefs of Staff. Since their newfound relevance comes directly out of their usefulness in war, they might become advocates of future interventions. The new DOD strategy addresses this possibility in a cryptic line, saying that “the Department will need to examine the mix of Active Component (AC) and Reserve Component (RC) elements best suited to the strategy.”

So it appears that the plan is to shrink the military significantly—but as always, the Pentagon is hedging its bet. “Wholesale divestment of the capability to conduct any mission would be unwise,” the strategy warns, “based on historical and projected uses of U.S. military forces and our inability to predict the future.” In other words, a lot will change, unless it doesn’t.