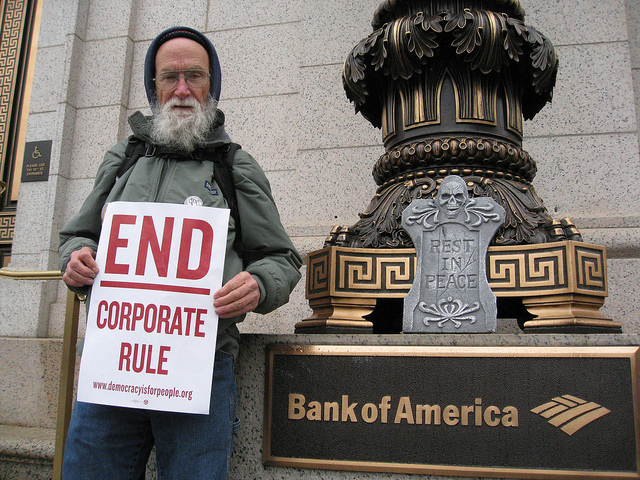 From Tennessee to DC, New York City to Seattle, Saturday marked one of the biggest days of protest around the issue of money in politics and corporate power in America. Pegged to the second anniversary of the Supreme Court’s Citizens United decision, there were more than 300 events, flying under the #J21 and “Occupy the Corporations” banners, at courthouses, banks, and corporate offices nationwide. The protesters have two main demands: get corporate money out of American politics and demolish the doctrine that corporations deserve the same free speech rights as real people—what’s known as “corporate personhood.”

Here’s a video the group Public Citizen put together recapping the weekend’s events:

The campaign to roll back Citizens United and end corporate personhood is slowly gaining traction around the country. The aims of the organizations involved—Public Citizen, Move to Amend, People for the American Way, and others—range from demanding a constitutional amendment ending corporate personhood to giving Congress more power to regulate money in politics. So far, the city governments of Los Angeles, New York City, Boulder, Colo., Madison, Wis., and Missoula, Mont., have passed resolutions demanding a constitutional amendment to end corporate personhood. Move to Amend wants anti-Citizens United measures on the ballot in 50 cities around the country.

There are also at least six proposed amendments targeting corporate personhood and Citizens United in the House and Senate, all introduced by liberal lawmakers.

For the anti-Citizens United effort, 2012 is a make-or-break year. Organizers say they hope to ride the wave of enthusiasm surrounding the Occupy movement, and to make corporate money in politics a hot-button issue in an election projected to be the most expensive in American history. Lawmakers and activists say they’ve settled on the constitutional amendment strategy, as opposed to new legislation, because there are no other options left. The Citizens United decision, Sen. Tom Udall (D-NM) said last month, “has made it so we need a constitutional amendment. I don’t see how we tackle this any other way.”