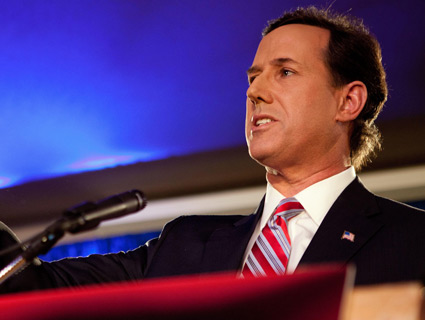 Is Rick Santorum a bully?

It came close to that in Concord, New Hampshire, on Thursday when he addressed a convention of college students who had trekked to the Granite State from across the nation to witness the first-in-the-nation presidential primary. After a long discourse on American exceptionalism—in which Santorum claimed that President Barack Obama does not believe the United States is “objectively” better than all other countries, as Santorum says he does—the former Republican senator from Pennsylvania, who virtually tied Mitt Romney in Iowa earlier this week, took questions. It was no surprise that one of the first queries was about his fierce opposition to gay marriage. Two students asked Santorum how he could justify this opposition with his opening remarks that focused on the guarantee, enshrined in the Declaration of Independence, that no American shall be deprived of the “pursuit of happiness.”

“So anyone can marry several people?” Santorum asked. “What about three men?”

Santorum has been in this spot before, and he easily adopted a here-we-go-again stance, and, in a somewhat condescending manner, struck back with…logic. Or what he claimed to be logic. He asked the students to justify gay marriage. When one said, “How about the idea that all men are created equal and [have] the right to happiness and liberty,” Santorum asked, Are you saying that everyone should have the right to marry anyone?

The student said yes. And Santorum quickly retorted. “So anyone can marry several people?”

No, the student said.

But what if someone can only be happy if he or she was married to five people? Santorum asked her.

Others in the crowd starting jeering him. “That’s not the point,” one shouted.

But Santorum, who kept cutting off the students, stuck to this argument. When the students talked about equal rights, he repeatedly interrupted, “What about three men?”

“That’s irrelevant,” one of the students said.

“That’s not what I’m talking about,” she said.

With a smile, Santorum said, “If we’re going to have a conversation based on rational, reasonable thought…if people say it’s okay for two, then you have to say why it’s not right for three.”

Santorum looked as happy as if he was scoring points in a high school debating match.

He noted that for his interlocutors, “marriage really means whatever you want it to be.” Many in the crowd applauded—to show approval of that notion.

But then Santorum got to the nut of his argument: “God made man and woman…and men and women come together to produce children.” And, he went on, when children do not have both a father and a mother, “we are harming children, we are harming society.”

His bottom-line was clear: Gays and lesbians are not good parents for the youth of the greatest country that ever existed. So no marriage for them.

When he was done, Santorum thanked the students for a feisty debate. Many booed him. And in one corner of the room an argument broke out between a middle-aged woman and a 68-year-old woman over unemployment benefits, with the older woman saying she was sick of working hard to pay for others not to work.

Through it all, Santorum had displayed a friendly disposition, but he certainly had not tried to hide the sharp corners of his archly conservative beliefs. And he had hardly brought this crowd together.