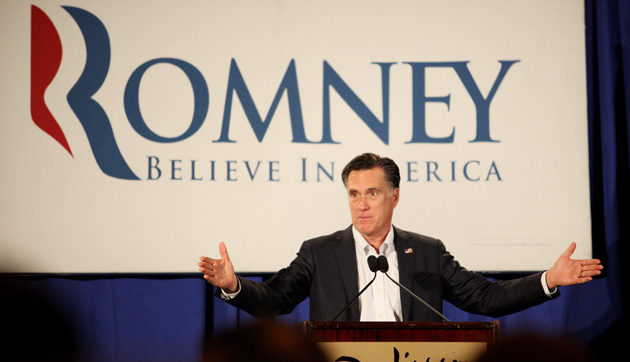 Andy Jacobsohn/MCTSeveral weeks ago at a Washington, DC, reception, I was speaking with a senior adviser to Mitt Romney. What I don’t understand, I said, was that the former Massachusetts governor, who had been running for president for five years (if not longer), had not improved much as a candidate. His debate performances had been fine, not commanding; his stumping was at best sufficient, not stunning. Most candidates improve over time. Romney appeared to have stalled out.

The Romney man rolled his eyes, and said, yeah, yeah, yeah. He had heard this a few times before. He acknowledged the observation was legitimate. But, he added, Romney is getting better. Really, he said. You’ll see.

In New Hampshire—where Romney triumphed with 39 percent of the vote, far outpacing Ron Paul (23 percent), Jon Huntsman (17 percent), Rick Santorum (9 percent), and Gingrich (9 percent)—the former failed presidential candidate did get better. Not much. But probably enough to propel him to victory in the GOP presidential nomination contest. Just as important, if not more, the non-Mitts™ did little to boost their own prospects.

In the Granite State, Romney put in two strong debate performances. Showing discipline on the campaign trail, he stuck to his simple, jingoistic message—Obama is a foe of American values and free enterprise and wants to turn the US of A into (oh-God-no!) Europe—even when it didn’t quite make sense. (In his victory speech on Tuesday night, he thrice used the word “Europe” and only once uttered “jobs.”) Since winning (kind of) the Iowa caucuses a week earlier, Romney had confidently strode toward the finish line in New Hampshire, while Gingrich and Santorum had seemed to crawl—and Huntsman skipped. (Paul was in a political world of his own.)

Toward the end of the New Hampshire campaign, Romney did take some pokes for claiming that he knows what it’s like to fear receiving a “pink slip” and for declaring that he likes “being able to fire people.” The latter remark was ripped out of context. (Romney was talking about canning insurance companies who provide inadequate coverage, not workers.) But more significantly, Gingrich, who had initially failed to make good on his post-Iowa threat to eviscerate Romney, finally dropped the Bain bomb on the former Massachusetts governor. As the super-PAC backing the former House speaker received $5 million to finance an assault on Romney’s association with rapacious corporate raiders, Gingrich himself accused Romney of “looting” companies when he ran Bain Capital.

All of a sudden, Gingrich was an economic populist. (Santorum, who in previous months had tried to craft a from-the-right populist message, barely worked this approach during his time in New Hampshire, concentrating more on his America-end-times message.) In a desperate, last-minute whirl, Gingrich bashed equity firms for buying businesses, stripping them of assets, and throwing workers to the curb. Sounding like William Jennings Bryan, he told reporters in Manchester on Monday: “Is capitalism really about the ability of a handful of rich people to manipulate the lives of thousands of other people and walk off with the money? Or is that, somehow, a little bit of a flawed system?” (It took journalists a few nanoseconds to discover that Gingrich was on the advisory board for Forstmann Little, a competitor of Bain Capital. With all his baggage, it’s almost impossible for Gingrich to level an accusation against another politician without it boomeranging.) In South Carolina—the site of the next Republican primary—Rick Perry, who had skipped New Hampshire, denounced Romney for leading a company of “vultures.”

The Bain blasts—which Huntsman also joined in—do have the potential of harming Romney, a man-not-of-the-people. But probably not in a way that will help any of his GOP foes. Politics is Einsteinian: Everything is relative. None of the I’m-not-Romneys appears poised to take advantage of any Romney missteps or misfortunes. Santorum couldn’t capitalize on his Iowa bump. Gingrich’s angry-man routine has not fared well. Huntsman, despite his miniboomlet in the Live Free or Die state, fizzled at the end and is heading toward much more difficult terrain in South Carolina. (Here’s a hard sell for conservative Republican primary voters: A Mormon to the left of Romney who once worked for Obama should be the Romney alternative.) Ron Paul’s support has a rather firm ceiling. And in the Florida primary on January 31—where only Republicans, not independents, can vote in the GOP primary—Paul will not be able to flood the zone with libertarian indies. As for Perry, waiting for a miracle is not much of a game plan.

The GOP market has yielded a cast of flawed products. Romney may stumble. He can be wounded. There are more attacks to come. (Gingrich has vowed that in South Carolina he will relentlessly slam Romney for having increased fees for gun owners in Massachusetts.) But all these slams on Romney are not doing any other 2012 GOPer much good. The assaults on Romney can’t help those who cannot help themselves.

The Bain-driven attacks against Romney, however, are helping President Barack Obama—but not in the obvious way. In every primary contest, the complaint is raised about intraparty mugging weakening the eventual nominee. But those concerns are usually overstated. In this case, though, if Gingrich’s allies spend millions of dollars on a Bain assault in South Carolina, the Obama reelection crew will have a wonderful opportunity to study the effect of such a campaign. It will be able to conduct focus groups and polls to determine if this line of attack is effective—or how to make it work in the general election, should Romney be the nominee. Gingrich, the erstwhile historian, will be providing valuable research to the metrics-fixated Obama campaign. He and his super-PAC backer, casino magnate Sheldon Adelson, are underwriting a lab experiment for the president.

New Hampshire offered the non-Mitts™ a chance not so much to defeat Romney, who once governed the state next door, but to demonstrate that they could enhance their own fortunes. They—as did Romney—did not generate boatloads of excitement in the state. The Huntsman surge yielded little. For Gingrich and Santorum—the non-oops/nonlibertarian conservatives in the race—New Hampshire was an opportunity blown. Romney is a politician blessed by hapless opponents.

As the circus packs up and heads south toward warmer climes, the political terrain will shift and become less hospitable for Romney. But he and his supporters can rest assured that none of the clowns have gotten any closer to taking over the GOP Big Top.