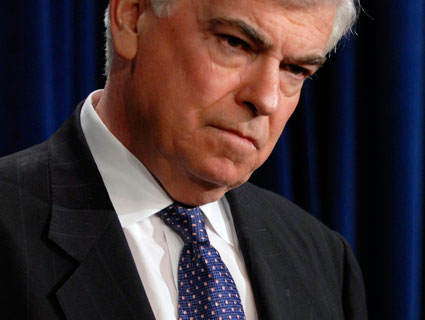 Former Sen. Chris Dodd (D-Conn.), now the chairman of the Motion Picture Association of America, was one of the biggest losers in the SOPA/PIPA intellectual-property fight.Mark Murrmann/Zuma

Just a few weeks ago, it seemed certain that the Stop Online Piracy Act (SOPA) and the Protect Intellectual Property Act (PIPA) would soon become law, allowing US courts to take drastic measures to punish alleged copyright infringers, including blocking access to entire websites. Some of Washington’s most powerful people and lobbying groups were lining up behind the bills, and both the House and the Senate were moving towards passage.

Now, in the wake of a tech industry and netroots uprising and an internet blackout last Wednesday, passage of either law seems all but impossible.

Last week, we explained how it all happened and highlighted the best SOPA-related humor. Here’s who won—and who got caught on the wrong side of the most ferocious debate of a young 2012.

The chair of the House oversight committee was picked for the post to be a thorn in President Obama’s side. But in this fight, Issa was an early and outspoken opponent of SOPA, and the White House eventually ended up agreeing with him. Issa is also the lead sponsor of the OPEN Act, which the tech industry lobbying group Net Coalition has put forward as a SOPA alternative. In fact, Wednesday’s internet blackout was originally timed to coincide with Issa’s hearing on SOPA. Issa canceled the hearing after support for the bill collapsed over the weekend of January 14-15, apparently to lessen the embarrassment the affair was causing his fellow Republicans.

Issa’s a tech millionaire himself—he founded the car alarm company Direct Electronics and is one of the richest members of Congress, with a fortune estimated at over $200 million—and his views on tech issues often differ from his those of his colleagues. He picked the right side in this fight, and came out looking savvy, prescient, and pivotal.

Wyden, unlike most of his colleagues in Congress, recognized that SOPA and PIPA granted the Justice Department broad, potentially crippling authority to crack down on allegedly infringing websites. He also understood that it threatened to ensnare small tech startups in expensive litigation at their infancy, and is sponsoring the Senate’s version of the OPEN Act. “If you’re concerned about income equality…the internet is where you take on the moneyed interests,” Wyden told the Washington Post on Friday. “The internet is the equalizer—the voice of the grassroots.” No one on the Hill comes out of this fight in better shape.

In Washington, committee staffers and legislative assistants can wield considerable influence on policy. Sen. Ron Wyden of Oregon, who chairs the Senate subcommittee on international trade, frequently relied on the counsel of the panel’s staff director, Jayme White.

White’s ability to fluently explain what’s at stake in the SOPA/PIPA fight was readily apparent last Tuesday, when he spoke at an event hosted by the Progressive Change Campaign Committee. The staffer argued that the very existence of the bills is evidence that Washington is broken, and that the tech community’s fingerprints must be on whatever new anti-piracy bill Congress draws up next. He also reminded the audience of the broader picture: that the United States sets the tone on free speech and civil liberties issues for the rest of the world. “What we do here creates international norms…what we do here would give foreign countries the license to replicate it,” White said. In the wake of Wyden’s big win on PIPA, expect White to continue playing a key role in future battles over tech legislation.

Pelosi, who represents most of San Francisco, is a natural ally of the tech community. But it took courage for her to face down the entertainment industry (and Nevada Sen. Harry Reid, the Democratic leader in the Senate and a major supporter of SOPA and PIPA) in a year when she and Democrats need all the help they can get to recapture the House majority and put Pelosi back in the speaker’s chair. The Dems may lose some entertainment industry donations thanks to Pelosi’s stance, but could easily make up the loss with increased fundraising in Silicon Valley. Lots of members of Congress came over to the anti-SOPA side when the fight was already mostly over. But Pelosi spoke out against the bill in mid-November, before it had even appeared on most of her colleagues’ radar screens.

The four remaining GOP presidential candidates, who all came out against the bill (to varying degrees) in Thursday night’s debate, thus avoiding a problem they don’t need right now.

The two California senators were caught in an impossible position. Their state’s two most important industries, Hollywood and Silicon Valley, were at each others’ throats. Sen. Feinstein tried to set up a compromise meeting between both industries’ bigwigs in December but was rebuffed. Boxer and Feinstein ultimately sided with the entertainment industry, but you can bet that they’d rather have not had to choose at all.

Tom Donohue and the US Chamber of Commerce:

The chamber, America’s top big-business lobby, rarely loses fights in Washington. Donohue, who’s run the chamber since 1997, was recently named the 10th-most powerful person in Washington by GQ. But the Chamber lined up on the entertainment industry’s side in this fight, and it lost badly. The fight could also make it harder for the Chamber to land money from big web companies like Google and Facebook in the future, especially now that Yahoo has left the Chamber over its support for the bills.

Maura Corbett, a spokesperson for the tech interest group NetCoalition, says the Chamber must choose between the old economy—big banks and the entertainment industry—and the new economy. But the failure of the business group’s unapologetic opposition “has proved that Washington isn’t for sale. It’s the most hopeful thing that has come out of Washington in a long time,” Corbett says.

Ryan eventually came out against SOPA—but not until January 9, after momentum was starting to shift. More damaging then Ryan’s late shift, however, was the online campaign waged against him. Ryan’s aspiring 2012 opponent, Rob Zerban, raised tens of thousands of dollars through a Reddit campaign by denouncing Ryan’s hemming and hawing on the legislation and pointing out that the Republican took nearly $300,000 from pro-SOPA donors. Republicans in Wisconsin’s state Legislature have redrawn congressional district lines in an attempt to protect Ryan in November. But in a good year for Democrats, Ryan could still be vulnerable. Even if Zerban doesn’t topple Ryan, the money Zerban has raised on the SOPA issue will certainly make the incumbent’s reelection fight a lot more expensive.

By coming out against SOPA and PIPA, the Obama administration may have made an enemy out of some very generous, very powerful friends. What might gall Obama’s entertainment industry backers even more than his reversal, though, is its suddenness. In the months between SOPA’s introduction last fall and the collapse of its momentum in mid-January, the White House gave no indications that Obama had any problem with the legislation. Then, out of the blue, the administration released a statement on January 14 saying that the proposals needed more work to gain the president’s blessing. Now that the bills are effectively dead, some of the titans of the entertainment world are reportedly planning to retaliate by withholding financial support for Obama’s reelection campaign. Well aware of this fissure, Republicans are poised to exploit it.

Until now, the Obama administration’s policy on piracy has been unequivocal: Anything that encourages the violation of existing copyright law is bad. Laws that seek to curb piracy—no matter how draconian—are good. But the SOPA/PIPA battle throws that black-and-white view of copyright policy into chaos, exposing the fact that anti-piracy legislation in the age of the internet isn’t just a simple matter of pulling down egregious websites and suing offending startups.

This was Chris Dodd’s fight to lose. Dodd had allies like News Corp. and the Chamber of Commerce, and his own organization represents entertainment companies that are run by some of the Democratic party’s most important donors. Coaxing these bills into law should have been easy. But as the broad bipartisan coalition backing the bills crumbled, Dodd proved unable or unwilling to broker a compromise, branding the successful January 18 web blackout as a mere stunt.

When the bills’ collapse was final, Dodd told the New York Times he wanted President Obama to broker a deal between the tech and entertainment lobbies. But coming to the negotiating table after you’re totally beaten just looks silly. The Times article also hinted that Dodd’s inability to directly lobby lawmakers (he’s prohibited from doing so for two years after leaving Congress) was one of the factors in the anti-piracy bills’ defeat. If the studios believe that Dodd was hamstrung by congressional ethics laws, it could threaten his seat at the head of the MPAA even further. In his four decades in Washington, Dodd has never looked so weak.

Sen. Patrick Leahy (D-Vt.) and Rep. Lamar Smith (R-Texas), the chairs of the Senate and House judiciary committees, respectively, for sponsoring the bills and shepherding them this far; the major television networks, for their lackluster coverage of the issue and occasional failure to disclose conflicts of interest; the AFL-CIO and Creative America (an anti-piracy lobbying group), for thinking that full-page ads in the Washington Post were the best way to respond to internet-based discontent with the bills.