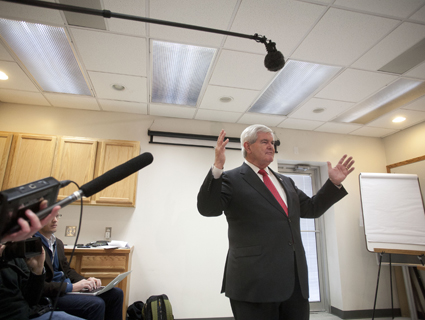 It is a matter of public record that Newt Gingrich is really, really into space. He proposed a “Northwest Ordinance for Space” in 1984 to establish a path to statehood for colonies in space; he proposed putting a system of giant mirrors in the atmosphere to light city streets at night and reduce crime; and he suggested that with enough government investment and/or private initiative, we might someday have colonies on the moon devoted to mining high-value minerals. For these ideas (and a few more), he earned the nickname “Newt Skywalker” from his colleagues.

And in his 1984 book, Window of Opportunity (and again in his 1994 book, To Renew America), he suggested that private space flight would open up business opportunities for space tourism—specifically for honeymooning couples. As he put it: “Imagine weightlessness and its effects and you will understand some of the attraction.” Oh?

If Gingrich thought sex was improved, that wasn’t the only thing. He wrote in Window of Opportunity that “In medicine alone, we may find that the effect of weightlessness on certain manufacturing processes carried on in the relatively sterile and pure environment of space will result in a multibillion-dollar industry.”