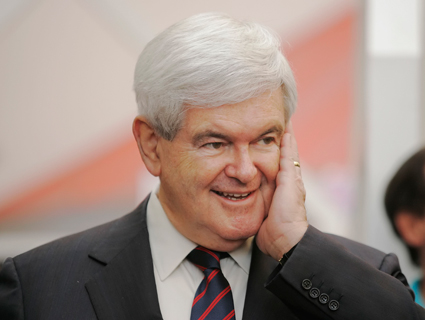 Newt Gingrich puts a hand over his left ear, presumably to block out the sound of that awful rock music.Billy Suratt/Apex MediaWire/ZumaPress.com

Newt Gingrich’s ring-tone is ABBA’s “Dancing Queen,” so the operative question when considering his musical tastes isn’t whether they’re terrible, but just how that came to be. The answer, as with all things Gingrich, has to do with politics. In an interview with Frontline in 1995, his college friend, David Kramer, explained that Gingrich didn’t really the see the point in music if he couldn’t manipulate it for political gain:

I remember one afternoon taking the ‘White Album’ over there and playing it through and explaining to him what was significant about this whole experience. I’m not sure he ever figured it out. One night we went to a Jefferson Airplane concert in New Orleans and he found that very interesting—there were a lot of people there who were very excited and of course, his question was, ‘Is there any political value in this?’

Sounds fun. As it happens, “Dancing Queen” actually has been appropriated for political ends. In 2010, the far-right Danish People’s Party, obviously well-informed of the listening habits of 21st-century Danish youths, rewrote the lyrics to the song in an attempt to appeal to younger voters. When ABBA protested—”ABBA never allows its music to be used in a political context”—the party took the song down.