How I stopped worrying and learned to fund the bomb: Project on Government Oversight

As the president prepares to unveil his federal budget plan next week, it’s a good time to remember that there are boondoggles, and then there are boondoggles. Under the latter, see the multi-billion-dollar “Chemical and Metallurgy Research Replacement-Nuclear Facility,” a single unfinished building in a New Mexico nuclear complex whose cost has ballooned since its approval a decade ago, and whose main purpose is to build stuff we don’t need: plutonium components for new atomic bombs.

As you can see from the Project on Government Oversight’s infographic below, the entire CMRR complex, located at Los Alamos National Laboratory, was slated to cost US taxpayers $375 million in 2001. But now, just one half of that two-building plant is expected to cost between $3.7 and $5.9 billion. “[S]everal major changes have occurred that have fundamentally affected the basis of the cost estimate,” a Los Alamos talking points memo states. Basically, construction costs rose and mistakes were made, since nobody’s built anything like this before. Here’s the result: 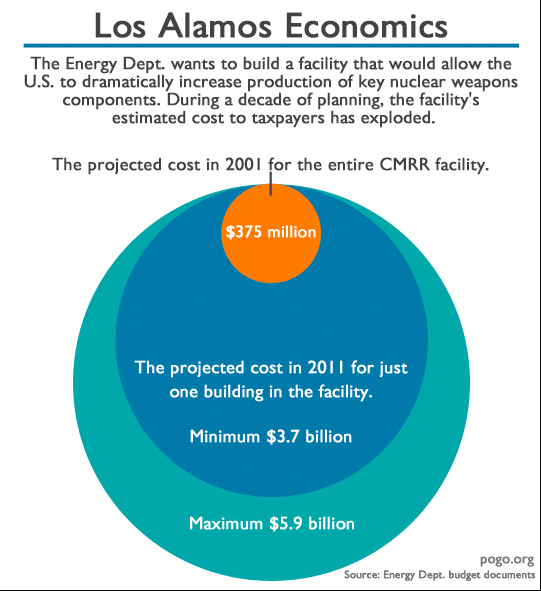 What does that buy America? According to a 2008 congressional report, the facility and its surrounding complex have “no coherent mission to justify it unless the decision is made to begin an aggressive new nuclear warhead design and pit production mission at Los Alamos National Laboratory.” In other words, its purpose is to build new nukes—and at a time when we’re supposed to be cutting our nuclear arsenal, not expanding it.

The New START treaty with Russia, signed in 2010, obliges us to reduce our arsenal of 5,000-plus warheads, far more than are needed to cover most of the scenarios in the US nuclear strategy. “Nowhere have I found a concise, objective description justifying [CMRR’s] need,” Bob Peurifoy, a former VP of another US atomic-arms facility, wrote in an affidavit criticizing the site’s construction [PDF]. “The Nuclear Facility might just sit there with nothing to do.”

Proponents of the facility and its incomplete structure say that even if no new nukes are ordered, the facility will be used to keep our current arsenal safe. “The primary mission of CMRR will be to support the current nuclear weapons stockpile through surveillance and life-extension programs necessary for the nuclear weapons complex,” the Los Alamos memo states.

But there’s a problem: Los Alamos is staying mum on the opening date for the complex. And the Project on Government Oversight estimates it won’t be operational until at least 2023—by which time all of the US military’s existing weapons will have gone through already-scheduled “life extension” upgrades. The CMRR nuclear facility will indeed be a building without a mission, all for roughly 12 times the amount of money President Obama is begging Congress to spend on Alzheimer’s research next year. Somebody set up us the bomb!