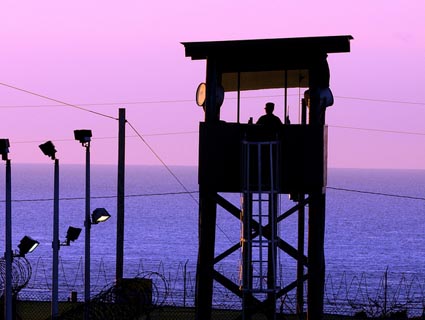 Gitmo detainee Majid Khan, accused of being a facilitator for alleged 9/11 mastermind Khalid Sheikh Mohammed, is reportedly in the midst of a plea deal with military prosecutors that will lighten his sentence in exchange for his testimony against other suspected terrorists. This has former Bush administration speechwriter Marc Thiessen in an absolute rage:

Giving this killer a reduced sentence is outrageous. Khan is no run-of-the-mill terrorist. He was directly subordinate to KSM and was selected by the 9/11 mastermind to conduct terrorist operations inside the United States. Khan even passed a test KSM orchestrated, which showed Khan was committed to being a suicide operative. Khan agreed to help KSM set up a front business to smuggle explosives into the United States for use against economic targets and to lead a KSM plot to blow up gas stations along the East Coast, but he was captured before he had the chance to enter the United States. He had been charged with war crimes, including murder, attempted murder, spying and providing material support for terrorism — all of which could have earned him a life sentence. Instead, he might now be released.

The Khan plea deal is a direct consequence of policies Thiessen supported. Thiessen is a huge apologist for the Bush-era CIA torture program, which was of dubious usefulness but nevertheless made it vastly more difficult to actually prosecute suspected terrorists because the evidence against them is tainted. Khan has said that he was tortured so badly that he attempted to commit suicide by chewing through his own arteries. His statements about his treatment have been censored by the US government, however, so we don’t even know all of what he says was done to him.

Thiessen and other conservatives who have defended the use of torture and blocked federal trials for detainees only have themselves to blame for Khan’s reduced sentence. They’ve done everything possible to ensure things would play out this way.