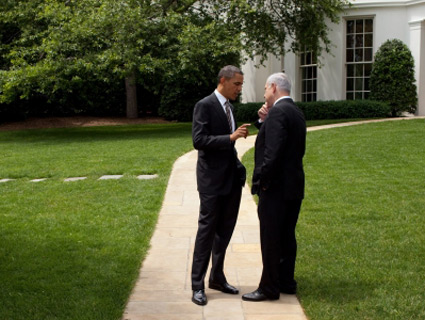 Israeli Prime Minister Benjamin Netanyahu is reportedly planning on urging President Obama to declare explicitly—and publicly—that the US is ready for military operations in the event that Iran breaches certain “red lines,” a senior Israeli official tells Haaretz. The two leaders will meet in Washington this Monday, during which the prime minister will push the White House to ratchet up its rhetoric. (This may include asking the president to clarify his statements that he will take “no options off the table” to prevent Iran from acquiring a nuclear weapon.)

This is the latest report (out of many) underscoring a growing diplomatic rift between Washington and Tel Aviv regarding a preemptive strike on Iran’s nuclear installations. One senior Israeli official involved with the dialogue quipped that “talks with the Americans are like porcupines having sex—slowly and carefully.” As the Haaretz piece explains:

According to sources, the lack of trust between Israeli and U.S. officials appears to stem from, among other things, a mutual feeling that the other country is interfering in its own internal political affairs. Netanyahu suspects that the U.S. administration is attempting to turn Israeli public opinion against an attack on Iran, say sources. Meanwhile, they say, the Obama administration suspects Netanyahu is using Congress and the Republican candidates in the presidential race to put pressure on Obama to support such a strike.

American officials have been increasingly vocal about the undesirability of an airstrike on Iranian facilities. On Wednesday, the New York Times reported that US analysts have mapped out likely scenarios of Iranian retaliation, which include “launching missiles on Israel and terrorist-style attacks on United States civilian and military personnel overseas.” Analysts also predict attacks on US troops stationed in Afghanistan and petroleum infrastructure in the Persian Gulf. Their assessments, however, are not without the usual caveats:

Both American and Israeli officials who discussed current thinking on the potential ramifications…believe that the last thing Iran would want is a full-scale war on its territory. Their analysis, however, also includes the broad caveat that it is impossible to know the internal thinking of the senior leadership in Tehran, and is informed by the awareness that even the most detailed war games cannot predict how nations and their leaders will react in the heat of conflict…Any conclusions on how the Iranians will react to an attack will help determine whether the Israelis launch a strike — and what the American position will be if they do.

For now, at least, the conflict remains covert.