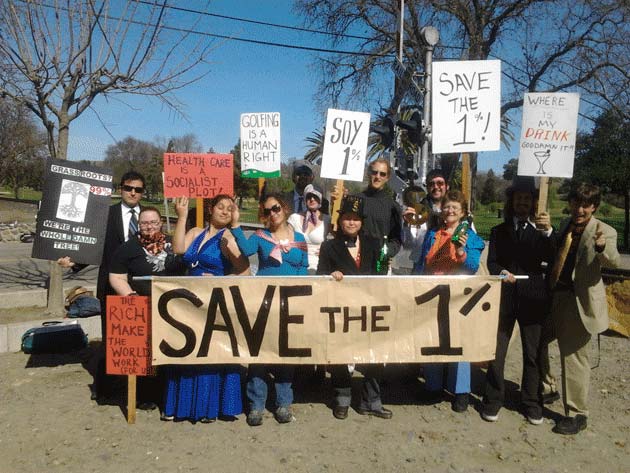 Pete Woiwode figures that if the 1 percent is going to take a stand against the 99 percent, it might as well be at a country club.

“I mean, we have a right to golf,” the 29-year-old community organizer proclaimed on Saturday. He was wearing a khaki suit and standing under the palms of Pleasanton, California’s Castlewood Country Club, where a dozen or so protesters had gathered near the 14th hole, next to a tent on which someone had written, “Save the 1%!” The group had come together to support Castlewood’s two-year lockout of its unionized cooks, dishwashers, and janitors—people who “are asking for so much,” Woiwode told me as another demonstrator sipped Perrier. “They are asking for health care and asking for their good jobs back. Why don’t they go out there and find other jobs?”

Pleasanton, a town of 70,000 southeast of Oakland, is fertile territory for a 1 percenter movement; the Census Bureau ranks it as the nation’s wealthiest mid-sized city. Located a short drive from the cute Main Street, the grounds of the Castlewood Country Club once surrounded a 53-room mansion inhabited by Phoebe Apperson Hearst, the mother of the Gilded Age newspaper magnate. Porsches typically clog the club’s parking lot and weekend warriors zip past its fairway on carbon-fiber Kestrels. On this day, one of them slowed down just enough to shout a single word at the Save-the-1-Percenters: “Idiots!”

Whether the biker thought the protesters ridiculous or just not rich enough was hard to say. Instead of the club’s de rigueur golf shirts and yoga pants, members of the group sported a faded top hat, wrinkled knickers, and a full-length evening gown of questionable vintage. Woiwode’s suit seemed ill-tailored and his Dockers the knockoff kind, but he didn’t let that curb his enthusiasm. “The real idiots are the people who are talking about trying to spread the wealth around,” said Woiwode (who works for anti-poverty groups in Oakland when he’s not advocating for the rich). He clutched a handmade placard that read: “Can I pay you to hold this sign? (It’s heavy)”. 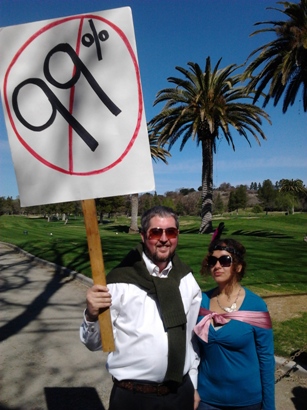 Members of Save The 1%

The conflict between Castlewood and its employees began three years ago during labor contract negotiations, when the club’s new management told employees that it would no longer cover as much of their health care costs. Workers whose families had received free health insurance would have to pay $739 a month, or 40 percent of their average salary, according to their union, Unite Here Local 2850. When negotiations broke down in early 2010, the club locked out its workers and hired scabs in violation of labor laws, the union alleges. The National Labor Relations Board will hear final arguments on the case on Thursday.

This past Saturday, not everyone was in on the joke. Observing the protest from the doorway of the nearby golf house, a club member told me that that the “Save the 1 Percent” message “seems a bit contradictory.”

Closer to the demonstration, a union backer furrowed her brow as the mock 1-percenters launched into another chant: “The wealthy, united, will never be indicted!”

“Whoever you are, support the workers,” she chided. “Do a chant for the workers!”

A few minutes later, several hundred union members marched to the club and staged a mock confrontation with the 1-percenters. “We won’t be silenced!” Woiwode yelled at them through a bullhorn. “We own the media!”

Organized by Unite Here and members of Occupy Oakland’s labor solidarity committee, the protest reflected a marriage of strategies. In recent years, California unions have embraced mock demonstrations, most notably in the lead-up to the 2010 gubernatorial election, when the California Nurses Association drew attention to the wealth of former eBay CEO Meg Whitman by hiring an actress to make appearances as “Queen Meg.” And of course, the 1 percent vs. 99 percent concept (and fixation on the ultra-rich) has roots in this fall’s Occupy Wall Street protests.

Speaking to reporters at the edge of the protest, Castlewood spokesman Vintage Foster said that the club offered a health package comparable to what other country clubs in the area provided and was justified in passing on rising health care costs to its workers. “Every company has had to go through this,” he argued. “That’s why Obama pushed through health care reform. It’s a societal issue, not specific to Castlewood.”

But Unite Here organizer Sarah Norr told me that the union offered to accept lower wages in exchange for better health benefits, saving the club money over the package it had offered prior to the lockout. “This is not about economics for them,” she said. “It’s about a philosophical opposition to workers having a union and having rights.”

With very few actual club members present at Castlewood (union organizers claimed the golfers had “locked themselves out”), it fell to “Save the 1 Percent” on Saturday to represent the clubgoers’ perspective. Holding up their signs behind Foster as he did TV interviews, the group seemed frustrated that he wasn’t more outspoken. “I mean, I am the victim here,” said a woman in a purple evening gown. “I’ve had parties over here with my children, and I’ve had to cross picket lines saying people want health care. How am I supposed to explain that to my children?”