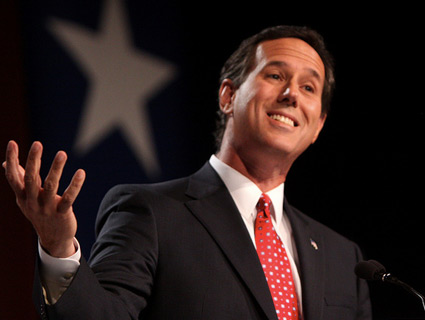 
Rick Santorum regularly knocks the stimulus bill that the Democratic Congress passed, and President Obama signed into law, back in early 2009. The American Recovery and Reinvestment Act “cost American jobs,” he told CNN last July. But that didn’t stop Santorum from claiming a tax credit for home efficiency funded through the stimulus plan that year.

According to his 2009 tax form, which was released last week, Santorum claimed a $3,151 expenditure on new exterior windows and skylights, one of the “qualified energy efficiency improvements” for homes that was granted a tax credit through the stimulus bill. The stimulus bill revived a tax credit that had expired at the end of 2007 and increased the amount of money homeowners could claim. This allowed the Santorum family to knock $945 off their taxes.

The purpose of the tax credit was to help homeowners save money by using less energy, while at the some time generating fewer emissions. But the efficient choices can often cost more upfront—hence the desire to create a tax credit to incentivize that kind of expensive upgrade. The measure was also intended to benefit the manufacturing and construction industries by creating more opportunities for them to make and install the windows and other efficient products.

Santorum has made attacking the Obama administration’s energy and environmental policies a prime plank in his platform, implying just last week that the president is some kind of dirt-worshiping hippie aligned with “radical environmentalists.” He’s also used his position on the subject as a way to distance himself from rival Mitt Romney, who has at times shown sympathy for protecting the environment.

“Who would be the better person to go after the Obama administration on trying to control the energy and manufacturing sector of our economy and trying to dictate to you what lights to turn on and what car to drive?” Santorum told the crowd at the Conservative Political Action Conference earlier this month. “Would it be someone who bought into man-made global warming and imposed the first carbon cap in the state of Massachusetts, the first state to do so in the country?”

Despite the major boost that the stimulus bill gave to the manufacturing sector, Santorum has accused Obama of “talk[ing] about how he’s going to help manufacturing, after he systematically destroyed it.” The stimulus is also one of the many things Santorum targets when he criticizes Obama’s “radical agenda.” “We’re not like the liberals. Every time we see a problem, we don’t have to find a government program to fix it,” Santorum said on the campaign trail in Michigan this week. “We encourage others to fix it without the government’s heavy hand.”

Santorum has also said he thinks that “all subsidies to energy should be eliminated.” He doesn’t, however, seem to have a great grasp on what those subsidies are, as he also claims that “there are not a lot of them” to eliminate—when in fact we provide about $20 billion worth every year. Nor did he comment on whether the tax credit he claimed just a few years ago would qualify as one.