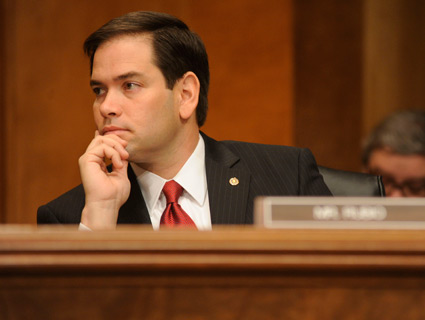 A new bill introduced by Sen. Marco Rubio (R-Fla.), a rising conservative star and leading contender for the Republican vice-presidential nomination in 2012, could cut off birth control coverage for millions of women who receive it through their health plans.

Rubio has sold his proposal—introduced January 31 as the “Religious Freedom Restoration Act,” or S. 2043—as a way to counter President Barack Obama’s controversial rule requiring even religiously-affiliated schools and universities to offer copay-free birth control to their employees. But health care experts say that its implications could be far broader.

If passed, the bill would allow any institution or corporation to cut off birth control coverage simply by citing religious grounds. (You can read the bill here or in the DocumentCloud embed below.) It has 26 cosponsors in the Senate; a similar proposal sponsored by Rep. Jeff Fortenberry (R-Neb.) has 148 cosponsors in the House. On Wednesday, Speaker of the House John Boehner (R-Ohio) vowed to repeal Obama’s rule, and Sen. Mitch McConnell (R-Ky.) pointed to Rubio’s bill as a potential model for doing so. Here’s the key section of Rubio’s proposal:

In English, this means that no entity has to cover birth control in a health plan if it can point to a religious reason for not doing so. And the entity itself is not required to have any religious affiliation. It could just be a plain old corporation. That means that if the middle-aged white guy who runs your company is religiously opposed to birth control, he can have it stripped out of your insurance plan—even if his Viagra is still covered. You could wake up the next morning and find you’re paying full price for drugs that you once got for free or at much-reduced prices.

“This could be huge,” says Judy Waxman, the vice president for health and reproductive rights at the National Women’s Law Center (NWLC). “It’s clearly more than a million women who’d be affected if it were just hospitals and universities [that were affected], but under the Rubio bill it could be any employer. It could be millions.”

The scope of Rubio’s plan could put him in political hot water. Nearly 90 percent of fertile, sexually active American women who do not want to become pregnant are currently using some form of contraception, according to the Guttmacher Institute. That’s 43 million people. And nearly every American woman who has had sex—99 percent—has used contraception at least once. Many forms of contraception can cost hundreds of dollars a year—and jumping from zero or a low copay to full prescription prices would hit many cash-strapped female voters where it hurts: in the wallet.

Several factors could blunt the impact of Rubio’s bill. Some companies wouldn’t want to be seen publicly as acting for religious reasons. And if they are paying close attention to their bottom lines and their employees’ health, corporations would think twice before ending birth control coverage for their employees—even for religious reasons. Birth control helps women space their pregnancies, but it’s not just about sex and reproduction. It can also reduce, treat, or prevent unpleasant and sometimes expensive and dangerous problems like ovarian cysts, endometriosis, cramps, and very heavy or irregular periods. The National Business Group on Health, a consortium of large companies, has found that failing to provide birth control actually increases health costs for companies by an estimated 15 to 17 percent.

Waxman, the NWLC, and other reproductive rights advocates also fear that the Rubio bill could harm Medicaid, a federal program that provides family planning and many other health care services to poor people. Obama’s health care bill included a massive expansion of Medicaid, but Rubio’s bill could allow governors who are opposed to birth control to deny it to Medicaid patients who were added to the program under Obama’s bill. All state Medicaid plans currently cover family planning, although the state is allowed to decide what that means. The Rubio bill would override that.

Rubio’s spokesman did not respond to multiple calls and emails seeking comment. I’ll update this story if I receive a response.