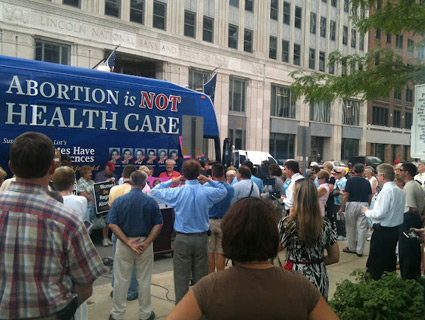 Rachel MacNair is a Quaker, a vegan, and to the left of many Democrats on most issues. In other words, she’s just about the last person you’d picture as a founder of the Susan B. Anthony List, an anti-abortion political group so hardline that it targeted pro-life Democrats for defeat in the midterm elections because it didn’t consider them sufficiently anti-abortion. MacNair, who parted ways with the group in the 1990s, is the first one to tell you how far she thinks the group has strayed from her initial vision. When I called her and asked whether she was the same Rachel MacNair who helped to launch the SBA List, she replied, “Much to my embarrassment.”

In the two decades since it was founded, the group, and its associated political action committee, has grown from a shoestring operation that directed several thousand dollars to a handful of female congressional candidates to an anti-abortion juggernaut that plans to dump millions into the 2012 elections. The organization, which last week endorsed Rick Santorum, has drawn high-visibility support from conservative luminaries like Sarah Palin and can claim at least partial credit for renewing the GOP’s war on Planned Parenthood. That was not quite what MacNair had in mind when she co-founded the group in 1992 as a pro-life answer to EMILY’s List, the pro-choice PAC.

Just as EMILY’s List (an acronym that stands for “Early Money Is Like Yeast”) supported pro-choice female candidates, MacNair intended that the Susan B. Anthony List would do the same for pro-life women—and it would be bipartisan. Its first slate of endorsements, in 1994, was a mix of Republicans and Democrats. “We were proud of that,” MacNair says.

SBA’s three initial founders were also a political grab bag. MacNair, who had spent 10 years as the president of Feminists for Life, held liberal views on most every issue except abortion, while her cofounders were more conservative. Hers was a broad concept of “pro-life,” drawn from her Quaker beliefs—she is also anti-war, anti-nukes, and anti-death penalty. Through the SBA List, MacNair envisioned not just electing candidates who shared her pro-life position, but of getting more women in office—period. “My idea was that it was always going to be all women,” she says.

Soon after MacNair left the group in mid-1990s to pursue her doctoral studies in psychology, the committee’s new leadership jettisoned this and other founding precepts. SBA now backs male candidates, after opening up its endorsement criteria in the late ’90s to include pro-life men who are running against pro-choice women. “I was furious,” MacNair says. “But at that point there was nothing I could do about it.” Nor has the group remained bipartisan. The group has supported only one sitting Democrat in Congress in recent years—Rep. Dan Lipinski of Illinois—and has formally endorsed only two Democratic candidates for a federal election since 2003. In 2010, the SBA List specifically targeted pro-life Democrats who had voted for the health care reform law, which foes claimed provided taxpayer funding for abortions. The group ran ads against 20 pro-life Dems, and claimed credit for defeating 15 of them. It was the first time the group had actively campaigned against anyone—let alone politicians who shared the group’s views on abortion.

“Well, basically what happened is that Republicans took over,” MacNair says. After MacNair’s departure, the group brought on more politically savvy Washington insiders, including Marjorie Dannenfelser, who became the organization’s president, a position she still holds today. Dannenfelser previously served as the staff director of the Congressional Pro-Life Caucus. While she is a Republican, she’d also worked for West Virginia Rep. Alan Mollohan—one of the pro-life Democrats who the SBA List helped to unseat in 2010.

The group’s mission, Dannenfelser says, has been to make itself as hard to ignore as the gun rights lobby or unions. “When we started about 20 years ago, you would not put the pro-life movement and the NRA in the same category. You just wouldn’t,” she says. “For us, it’s the issue that deserves a political machine more than any other. That’s been my goal—to make this issue, which is so fundamental, have the strongest political arm they could possibly have. That’s the direction I see this heading in.”

Under her leadership, the group transformed from a tiny PAC into a formidable force for electing Republicans. In 2002, the group spent $4.2 million on candidates at the state and federal level. Its election spending rose to $7.8 million in 2008 and $10.6 million in 2010. The group expects to spend more than $11 million on the 2012 election, Dannenfelser says. They’ve backed 69 sitting members of the House and Senate, and, for the first time in the group’s history, endorsed a candidate in a presidential primary.

Both Dannenfelser and MacNair agree that the group’s ideological shift reflects that of the country as a whole. There aren’t as many pro-life Democrats as there once were (and the SBA has done its part to further winnow their ranks). Nor are there many pro-choice Republicans, and the party has formally included a stridently anti-abortion position in its national platform. Announcing the endorsement, Dannenfelser said Santorum had “exhibited the strategic and tactical prowess the pro-life movement must have in order to succeed” and noted that the nation was at a “tipping point in history on the abortion issue.”

Abortion promises to be a key issue in the 2012 race. In the past year, about 400 anti-abortion measures were introduced around the country; national and state-level fights over Planned Parenthood funding have also kept the issue in the headlines. Measures like Mississippi’s “Personhood” amendment—a ballot initiative that would have granted full legal protection to fertilized eggs—that seemed untenable a few years ago now seem more plausible today. (The Mississippi measure was defeated, but personhood bills have been introduced at the federal level and are in the works in at least eight other states.) “I didn’t think it was a good idea four years ago,” Dannenfelser says. “I do think it is now.”

Heading into the 2012 election, the group plans to work to ensure the national focus on its signature issue doesn’t drift. “One thing we believe strongly that we can’t do is to allow the education and momentum, focus and attention to die,” Dannenfelser says. “I believe the intensity of attention on this issue in this election will outstrip all modern elections.”