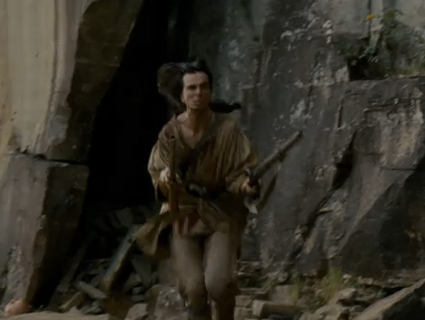 In Last of the Mohicans, British colonialists clash with anti-colonialists, and Daniel Day-Lewis fires two rifles at once.<a href="http://www.youtube.com/watch?v=E9SEFMIBwAs">YouTube</a>

Newt Gingrich’s 1995 college class at Reinhardt College in Georgia is noteworthy mostly for being the focal point of the ethics investigation that ultimately ended his reign as speaker of the House. The course, “Renewing American Civilization” was intended to train upwards of 200,000 conservative activists in advance of the 1996 election, but it also gave Gingrich a platform to say literally anything that was on his mind, for two hours at a time, once a week. Needless to say, he took full advantage—praising, at various points, Little House on the Prairie, the futurists Alvin and Heidi Toffler, Boys Town, the Magnificent Seven, and one of his all-time favorite movies: Last of the Mohicans.

The screen adaptation of the James Fenimore Cooper joint, Gingrich explained, captured the very essence of what it means to be an American:

One of my favorite movies is the Last of the Mohicans, which I recommend to all of you. It’s a great film about the French and Indian war. Wonderful scene where the American who was the Deerslayer is standing there and the British officer says, “aren’t you going to Fort William Henry?” And he says, “No, I’m going to Kentucky.” And he says, “How can you go to Kentucky in the middle of a war?” And he says, “You face north, turn left, and walk. It’s west of here.” It’s a very American response. And the officer says, “but you’re a British subject and you have to come and fight.” And he says, “No, I am an American.”

Now, he ends up going to fight. Why? Because of the girl—which is also classically American. It’s a very romantic country. It really, historically, is a very romantic country. You can’t be American without having romance in your heart. I mean, if you grow up as a cynic, it’s very hard to sustain the magic that’s American. But part of the conclusion I reached, oh, maybe 22 years ago, reading Daniel Boorstin’s work on the Americans, is that as important as the mountain man is—and you remember Jeremiah Johnson, which is a great film, and again, a very useful introduction to a real authentic American—there were very few mountain men. There were very few people who went out on their own in the woods.

We’re obliged to point out that Russell Means, who played Chingachgook in Last of the Mohicans, also briefly ran for vice president in 1984 as Hustler publisher Larry Flynt’s running mate. Four years later, he pursued the libertarian nomination for president and lost—to Ron Paul.