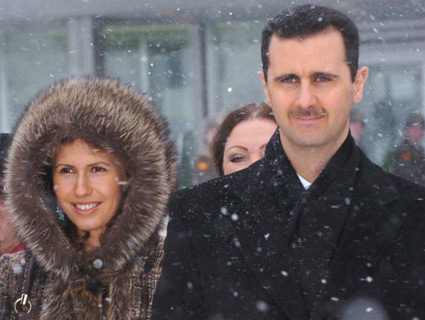 On Wednesday, The Guardian published its series “The Assad emails,” a compilation and analysis of dozens of emails obtained by the UK newspaper that appear to be hacked from the inboxes of Bashar and Asma al-Assad, Syria’s first couple. The cache includes juicy tidbits about how the Assad regime solicited help from an Iranian government media adviser on how to handle PR during the Arab Spring protests, and how the Syrian president cracked some lame jokes about empty promises for political “reforms.”

But the stolen emails also highlight how strikingly normal this brutal autocrat truly is in aspects of his daily life.*  Assad has directed the slaughter of thousands, subverted democracy at every turn, and threatened to “set fire” to the Middle East. But somewhere between the Barbara Walters interviews and all that mass-murdering, he makes time to troll the Internet. In an email titled “THE BEST ILLUSION OF ALL TIME!…” dated December 13, 2011—the same day government troops launched heavy attacks on the towns of Idlib, Homs, Hama, and Deraa—Bashar praises a magic trick performed on NBC’s reality TV show America’s Got Talent. He tells his spouse how the illusion—involving a bisected man and an Italian midget—”seems like David Copperfield.”

Other emails reveal what’s currently burning up his iPod, from British dance-pop duo Right Said Fred to LMFAO’s “Sexy and I Know It.” (His iTunes account is registered under a false name and a Manhattan address, most likely for the purpose of circumventing sanctions imposed by the US government in May 2011.) In an email from February, he sent his wife a file of “God Gave Me You” by American country star Blake Shelton—the same recording artist who gave us “The More I Drink.” And in late December, Assad circulated a crudely shot YouTube video that lampooned Syrian activists’ theories detailing how the regime hid tanks from Arab League monitors. Basically, Assad’s online time-killing included everything short of tweeting his wife pictures of awesome cats, or sending her a video of Snooki getting punched in the face.

The cataloged correspondence also paints Asma as a rabid online shopper, a bargain-hunter, a Harry Potter fan, and a loving wife. Other emails indicate that President Assad likes to surround himself with irreverent young aides, including ones who casually refer to him as, simply, “the dude.”

By now, it probably shouldn’t come as such a shock that tyrants and their families have mostly ordinary, if sometimes slightly odd, private lives and personas. For instance, Slobodan Miloševi? was incredibly sensitive and self-conscious about his big, cartoonish ears. Saddam Hussein fancied himself a part-time poet and novelist (one of his novels was just adapted by the creative team behind Borat). And Kim Jong Un has a humongous man-crush on Kobe Bryant.

But it’s worth noting in this case that for years a major plank of the Assads’ public relations strategy has been to portray themselves as thoroughly modern Arabs to whom Westerners can easily relate. This batch of emails suggests that those impressions didn’t necessarily have to be affected—and that there isn’t much of anything to their personal lives with which they could hope to shroud the horrors known of them worldwide.

* Often, though, this is to be expected.